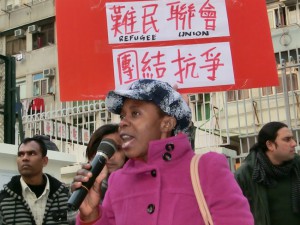 Refugees continued their occupation of ISS-HK offices (International Social Services Hong Kong) in Tsuen Wan, Mong Kok and Prince Edward for a fourth day on 14 February. Support is beginning to grow for the protest action that targets abuses by the Swiss-based NGO’s Hong Kong branch, which receives over HK$200 million a year in government funding but has generated a flood of complaints from asylum seekers.

“We are treated like animals! But by uniting we show we are strong, we can change things,” said one of the occupiers from a first floor window of the Prince Edward branch to supporters in the courtyard below. Many of the concerns relate to food distribution by the agency, which the occupiers say falls far short of the value stipulated by government.

Legislator ‘Longhair’ Leung Kwok-hung of the LSD (League of Social Democrats) visited the occupation on Friday evening and pledged to set up meetings with authorities including ICAC (Independent Commission Against Corruption). With more than 60 protesters gathering at the Prince Edward occupation on Friday, the Chinese-language press – including Apple Daily and TVB – made a long awaited appearance.

Socialist Action supports the occupation and demands for refugees’ rights to be strengthened. We oppose the government’s manic outsourcing of refugee services to agencies like ISS – all welfare provision should be under democratic public sector control. Socialist Action members are assisting the occupation and the newly formed refugee union in a number of practical ways – with loudspeakers, banners and placards in Chinese, and contacting the Chinese language media. More support is needed and if the pressure is stepped up in the coming period the refugees can win concessions from the government. This would represent a victory for all workers and oppressed people in Hong Kong.