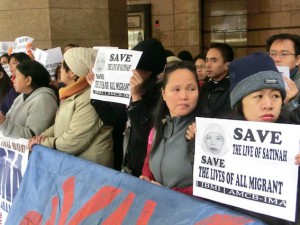 HONG KONG: Around 40 migrant workers and their supporters staged a manifestation outside Saudi Arabia’s consulate in Wan Chai to call for clemency for Satinah Binti Jumadi Ahmad from Indonesia who may be executed by decapitation in coming weeks.

Satinah, one of almost 4 million migrant workers in Saudi Arabia, was convicted in 2007 of murdering her employer. A domestic worker, like many Indonesian migrants in the Gulf States, she insists she suffered a series of abuses by her employer prior to the killing. Saudi Arabia is an ultra-repressive feudal state, which brutally oppresses women, minorities and its majority-foreign working class. Migrant women like Satinah are therefore bottom of the pile when it comes to basic legal rights.

In the kingdom’s prisons there are 27 Indonesians and 140 Filipino migrants awaiting execution. This shines a spotlight on the reality of modern-day slavery – the trafficking of around 105 million migrant workers worldwide who are exploited as cheap labour often on prestige construction projects like the Sochi Olympics and Doha World Cup (where 185 Nepalese construction workers have been killed), but also as domestic workers working night and day under precarious conditions.

The protesters in Hong Kong chanted “Save the Life of Satinah! “ and “Justice for all migrant workers!” There was anger over the inaction of the Indonesian government and other governments.

Satinah’s case is deeply tragic. Her execution was postponed in 2010 by royal intervention to allow her family and the Indonesian government to offer ‘blood money’ to the victim’s family in return for a pardon. The sum was set at 7 million Saudi riyals, or 1.9 million US dollars! The Indonesian government set up a financial appeal but has so far raised just a fraction of this amount.

“Since the Indonesian government failed to raise the amount needed for the blood money, Satinah’s execution is now imminent,” said a statement from the Asian Migrants’ Coordinating Body (AMCB) in Hong Kong, which organised the protest. Several speakers addressed the demonstration including Eni Lestari of AMCB and Sringatin of the Indonesian Migrant Workers’ Union (IMWU). Vincent Kolo of Socialist Action also delivered a message of support.