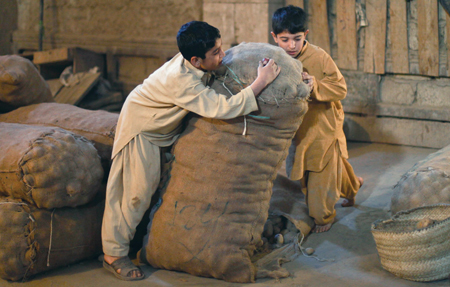 In recent weeks, the deaths of five female child domestic workers has once again highlighted the menace of rampant violence and abuse against children in Pakistan. The situation has reached horrific proportions. The beating, abuse and sexual violence against these domestic child workers has become the norm. This violence and abuse continues unabated in society where it is not considered a crime.

The plight of tens of thousands of under-18 year old domestic workers is worsening in Pakistan. They are hired through parents and middle-men on a monthly and often on a yearly basis. Violence against them is widely reported. The overwhelming majority of these children belong to the poorest and most backward districts of the Punjab. The poverty-ridden poor families of these districts send their children to the rich areas of the big cities. They earn a meager wage of 15 to 20 pounds per month. In some cases, they are employed on three or five year period for a specific sum of money, in a one-off payment to their parents. This amount ranges between 150 to 300 pounds for three years. The parents and middle men leave these vulnerable children to the mercy of the employing family. These young children work 14 to 18 hours a day – mostly without any proper break. The verbal and physical abuse and violence is a fact of everyday life for them. They are not even allowed to meet their parents for months on end. They live in the worst form of slavery. The young girls are the most vulnerable. They face sexual abuse and violence very often.

If the poor, helpless parents try to raise their voice against this abuse and violence, the rich and influential employers allege that they are thieves. They threaten to hand over the children to the police to silence the parents.

Recently five girls, aged between 10 to 15 years, were tortured to death by their employers and charged with stealing money and gold ornaments. In two cases, the girl child domestic workers were also raped and sexually abused. All these cases took place in rich areas of Lahore, which is the second largest city in Pakistan. The people involved in the torture and abuse of these girls are members of educated, upper-middle class families.

According to press reports, at least 21 child domestic workers (CDWs) were tortured to death in 2013, mostly in Punjab. Apart from two, all were girls. Another report states that between January 2010 and June 2013, there were more than 41 cases of torture of child domestic workers reported. Some of these children were even poisoned.

Data compiled by the Child Rights Movement (CRM), an alliance of more than 25 non-governmental organisations -working on childrens rights, states, “In 2011, a total of 11 cases of child abuse at workplace were reported; shockingly, seven of them lost their lives. In 2012, eight children were abused, two died and six seriously injured.”

There is no law which prohibits domestic child labour in any province of Pakistan. Even the existing laws of child labour and protection, indirectly regulate child labour.

The governments should devise policies to protect the vulnerable domestic child labour. Such cases are not vigorously pursued by the state and only end up with a pathetic level of compensation (Diyat).

Undoubtedly, the issue needs a forceful collective voice. The 2013 general election manifesto of the ruling Pakistan Muslim League (Nawaz) promises to, “Enact or improve legislation on violence against women and child abuse.” It also promises to “introduce a transparent system of income support programme for needy families with incomes below the prescribed limit with a special focus on widows, orphans and the girl child,” for social protection.

The abolition of child labour is a long outstanding issue. The government could legally stop domestic child labour by simply issue a “notification” under the existing law, terming CDW as a “most hazardous form of labour”. It just needs the single stroke of a pen. But nothing has been done in this regard, so far. Legally all forms of forced labour and slavery are banned under the law in Pakistan. In reality it is still going on. More than 10 million children are employed as child labour in Pakistan. Child labour is the worst form of slavery and exploitation. It must be stopped. The trade union movement and womens’ rights movement should launch a country-wide movement against this curse and cruel practice. The labour movement and women rights bodies should immediately call for declaring child domestic labou, as the worst form of child slavery, and demand a complete ban on it.

No child labour survey had been officially conducted since 1996 to determine the exact number of child labourers in the country. So, no up to date figures are available, at the moment.

The history of legislation has not been kind to child domestic workers in Pakistan. In the largest populated province of Punjab, a law was enacted in 1952 and amended in 1983. Both the laws were not “notified” and therefore failed to come into force. In Sindh, the Children Act 1955 was notified to come into force in 1974! The first law about children’s employment in the subcontinent came into force in 1930, under British Rule. India modified this law and introduced the Child Employment Act in 1986. Pakistan almost copied this law in 1991. India, in 2006, passed the Prohibition of Child Labour Act banning domestic child labour. After devolution, the Punjabi government, in Pakistan, introduced the Children Employment Act 2011. The law prohibits four professions and defines 34 areas/occupations as “hazardous for child labour” making them illegal. However, excluded from it is domestic child labour.

Laws alone will not fully solve the problem

In the light of the UNCRC and its Optional Protocol on Sale of Children, the ILO’s Conventions 182 and the Constitution of Pakistan, the federal and provincial governments should immediately declare CDW a form of slavery and include it on the list of one of the worst form of child labour. It should immediately be banned across the country under the list of banned occupations given in the Punjab Employment of Children (Amendment) Act 2011.

Laws alone will not fully solve the problem. The full implementation of laws can improve the situation but it can not completely abolish child labour, especially domestic child labour. The existing economic and social conditions have created this menace and radical change in the economic and social conditions along with political transformation will abolish the conditions which nourish such social evils. The question of child labour is directly linked with system which creates poverty and hunger. The capitalist and feudal system creates the conditions in which child labour and poverty flourishes. The struggle to abolish child labour, exploitation, hunger and poverty is directly linked with the struggle to abolish the rotten capitalist and feudal system.