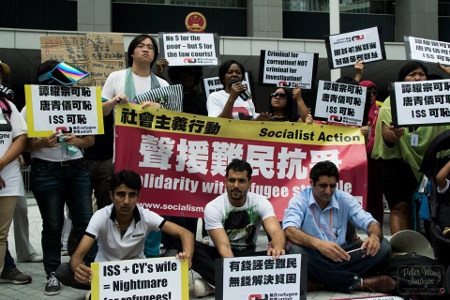 Refugees in Hong Kong are united, and refuse to be ignored anymore. On January 27, a few dozen refugees established the Refugee Union, and within two weeks organised peaceful occupations of ISS-HK offices in protest against underpayment of food and housing allowances and unfair welfare policies.

In Hong Kong with its massive wealth gap, refugees are often ignored, blamed as a burden to society, and left to exist as a destitute, forgotten population. Legally prohibited from working in Hong Kong and from contributing to the local economy, refugees are forced to rely on meagre assistance provided by International Social Service-Hong Kong (ISS-HK), a private company sub-contracted by the Social Welfare Department (SWD). This is another example of Hong Kong’s crazy outsourcing and privatisation policies.

“The local government doesn’t want refugees to be secure as they wrongly claim that it will attract more asylum seekers,” says the Refugee Union chairperson Raymond. “So ISS-HK is like a henchman only following the boss’ orders”.

Hoping to make their voices heard and their basic needs met, Refugee Union filed a formal complaint against ISS-HK at the Independent Commission Against Corruption. Soon afterwards ISS-HK won a court injunction to evict the protesters who relocated their peaceful occupation to a public area near the Social Welfare Department (SWD) headquarters in Wan Chai on February 27.

“We don’t want to break the law and risk being arrested,” says Raymond. “Criminal records could interfere with our asylum cases at UNHCR and make resettlement to another country more troublesome”. Their occupation is a last resort action, he says, taken in protest against unfair access to the assistance to which they are entitled by Hong Kong law.

As of early 2014, SWD determined that refugees are each entitled to receive a monthly housing allowance of HK$1500 in the form of paid rent for self-arranged accommodation. They are also entitled to receive food packages consisting of products worth approximately HK$1200. However, neither allowance meets basic living costs in Hong Kong.

According to Raymond, the Refugee Union met with SWD officials for negotiations in February, without any success. One of the union’s demands was for ISS-HK to ensure transparency and accountability, and to publish the prices of products in food packages on which the refugees depend.

Refugees’ complaints have been verified by the South China Morning Post, which found the typical food packages from ISS-HK to be worth up to 30 percent less than what the government pays for.

“That amounts to about HK$20 million of taxpayers’ money taken away from our allowances and into the pockets of officials,” says Raymond.

There is a historical precedent for the criticisms of ISS-HK and the government. According to former government adviser Leo F. Goodstadt, ”refugees and squatters were continually portrayed as threats to Hong Kong’s survival and governability. Officials insisted that any welfare or similar assistance provided for the newcomers would encourage further influxes.” Goodstadt continues, ”officials guarantee that those unable to support themselves would be provided with an income to meet their basic needs. Food aid also pandered to the sceptics who believed the poor could not be trusted with cash benefits.”

As Raymond explains, “many refugees are not well aware of their human rights, and so the government gets what they want. They torture and oppress us, hoping that we leave Hong Kong and risk death back home.”

Multiple local and international news reports have also revealed that many refugees are forced to sleep in derelict buildings reconstructed from pigsties, that are registered under false addresses, and that do not match descriptions on the official rental contracts signed with landlords.

“Who created this poverty madness? Don’t blame refugees of creating this poverty madness. It is unfortunate that people only see the beautiful side of Hong Kong. So many have no idea that asylum seekers and refugees exist, let alone know of our suffering here in Hong Kong,” Raymond explains.

“Recently, a pregnant Nepali refugee joined our occupation in Wan Chai. It says a lot that she would rather live with us in a tent at the occupation than argue with her landlord about ISS refusing to pay rent,” he adds.

The extreme poverty faced by refugees has driven some to resort to stealing or working illegally, risking arrest and imprisonment. Resettlement cases can then be tainted by a criminal record.

“The Hong Kong court system is biased against the poorer class. There are many refugees who end up in prisons and detention centres and face inhumane treatment,” Raymond says. ”It is ironic, some refugees say that there are less immediate needs to worry about when in prison than when suffering outside because at least they have a room. We already lost everything. We really don’t have much left to lose.”

“Give us the right to work”

As Socialist magazine goes to print, the Refugee Union continues its occupation nearby the SWD headquarters and has spread to a second protest camp in Central, near IFC.

Raymond explains how things are run: “On average, about ten of us sleep here in tents at the occupation every night. While many people rush to work and walk by the occupation every morning, many other interested individuals, refugees and people of Hong Kong, visit us to give support and donations. For security, we keep a logbook. Every visitor is also invited to write down in the visitor’s list their name, country of origin, telephone number, and time of visit. That way, it is much more effective for the Union to contact people for updates and to organise future plans for our refugee movement”.

The Refugee Union continues to pressure ISS-HK and SWD to be more accountable. The Union welcomes donations and visits to discuss at the occupation.

“We refugees are more united than ever. We want to thank Socialist Action, the Committee for Workers International, and Vision First, for advising us about politics in Hong Kong, making banners, and showing us how to fundraise. If they didn’t help us continue with making plans, maybe we would have given up. But now, we will fight for our rights until we win!”

Some facts about refugees

There are currently 45 million refugees worldwide, the highest figure for 14 years according to the United Nations. The bulk of these people, fleeing war or persecution, are “internal refugees” who do not leave the borders of their own country. These account for 28.8 million, or 64 percent of the total. Contrary to widespread myths about refugees, only a small minority arrive in rich countries. The majority live in poor countries – Colombia (4.9 million), Syria (3 million), Democratic Republic of Congo (2.7 million), Sudan (2.2 million) and Iraq (2.1 million) hold most internally displaced persons.

According to SWD statistics (2012) there are over 5,700 refugees in Hong Kong. Hong Kong is known for only taking a small number of refugees even compared to other developed economies due to its ultra-strict rules on asylum.

A refugee is defined as a person outside his/her country of nationality with a well-founded fear of persecution or having experienced persecution on the grounds of ethnic origin, religion, nationality, membership in a particular social group, or political opinion. Risking extreme violations of human rights, including torture or even death, they are forced to leave behind everything they cherished. In order to seek temporary protection in Hong Kong, one may apply for an “asylum claim” or a “torture claim”.

Stuck in legal limbo in Hong Kong and risking dangers in their respective home countries, they also depend on the Hong Kong government and the United Nations High Commissioner for Refugees (UNHCR) to process their refugee cases.

Refugees, according to academic Gordon Mathews, ”continue to eke out lives year after year in Hong Kong, unable to travel outside the territory, waiting interminably to have their cases decided”. Trapped in a temporary place of transition, some of them waited for an official decision or a resettlement host country for more than 16 years, and are frequently ignored when a complaint letter is submitted.

Socialist Action: What we stand for

Socialist Action defends the right of asylum, which is a basic democratic right. There are many famous asylum seekers in history including Karl Marx, Sun Yat-sen and Albert Einstein. We oppose the Hong Kong government’s inhuman policy, which effectively refuses to recognise the right of asylum. When right-wing capitalist governments and politicians reject the right of asylum, or scapegoat refugees as “welfare tourists,” these policies are always part of a wider attack on democratic rights and welfare in general. They are part of an attack by the billionaire elite against the whole working class, and the only answer is united struggle by all oppressed groups together.

It is the diseased system of capitalism and imperialism that results in wars and civil wars – as now in Ukraine and Syria. The profit system is in crisis, which leads to growing military budgets, support for dictatorial regimes, and increasing nationalism. This in turn creates “failed states,” mass poverty, and ethnic or religious conflicts which force millions to flee their homes. Capitalism’s “answer” is more brutal state repression, militarised borders and increased racism. Our answer is the change the world along democratic socialist lines – to run society for the needs of the people, not the profit of a few.