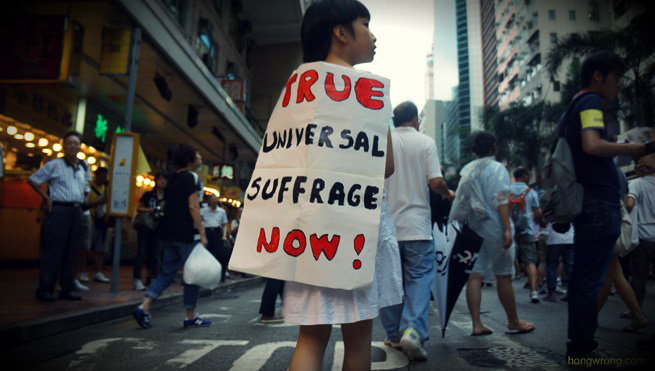 On 31 August the Chinese government laid down very restrictive rules for Hong Kong’s coming elections. What does this mean for the democracy struggle?

“It means the elections for Chief Executive in 2017, supposedly by one-person-one-vote, will be rigged by the one-party (CCP) dictatorship. They’ve imposed a nomination committee, like in Iran, so that only pro-CCP puppets can stand. We’ve been protesting, with big demonstrations in Hong Kong, to demand ‘public nomination’ – for anyone to be able to run – but Beijing is dead against this.

“The ruling was issued by the National People’s Congress (NPC) Standing Committee, which is a completely undemocratic fake ‘parliament’ controlled by the CCP. It means the undemocratic Election Committee in Hong Kong, which chose the current Chief Executive, will be turned into the nomination committee. This is an elite body of 1,200 people, mostly millionaires who worship the one-party dictatorship. This model gives the CCP 100 percent control. The voters get to choose between a rotten apple, rotten orange and a rotten banana!”

How have people in Hong Kong reacted?

“There is widespread anger and even shock. Students are preparing to go out on a one-week strike and there are plans for an occupation in the city centre (Occupy Central). People are very frustrated because the struggle for democratic rights – universal suffrage – has gone on since the British ruled, for over 30 years now.

“Today, things are actually going backwards. There are more media controls, the police and courts are more heavy-handed against protesters and the CCP is increasing its controls over the political system. So, Beijing’s ruling is part of a trend to roll back the limited democratic space that Hong Kong has won through mass pressure in the past.

“This also shows up big weaknesses in the policy and strategy of the pro-democracy leaders (pan democrats). Hong Kong is well known for its big democracy protests, some with over half a million people taking part. But this has not yet succeeded in winning democratic elections. We have explained that the dictatorship will not be ‘persuaded’ or pressured into granting democracy, because they are a dictatorship, and they want to keep full control.

“Beijing can make some concessions, for sure, if they face enough mass pressure. But any concessions will stop short of undermining their power and control. In 2003, the government withdrew an unpopular national security law (Article 23) in what became a very big victory for the protest movement. But this was different to the situation today; in that it was a retreat they could live with. Their power was not threatened. If they concede a real one-person-one-vote system however, they fear the election of somebody they cannot control, who under mass pressure could come into conflict with Beijing. This could set off a chain reaction inside China, with people openly daring to challenge the dictatorship.”

Does this mean it’s impossible to fight the CCP?

“No, it doesn’t mean that. What’s needed is mass struggle to end one-party rule – there will be no democratic elections under this dictatorship, that’s obvious. The Hong Kong struggle can be a catalyst, but needs to link up with the masses in mainland China. This is not the strategy and approach of the pan democratic leaders who put all their hopes in a compromise with the CCP. They view mass protests in Hong Kong only as a card in the negotiations. We’ve always said this is not enough, not against a regime like the CCP. The NPC decision has confirmed what we said.”

So what is your alternative?

“We support all the initiatives for mass struggle, like the school strike. In fact, Socialist Action were the first organisation in Hong Kong to call for a school strike. We raised this some years ago, but other organisations either rejected this as too ‘radical’ or didn’t understand its potential. We support the occupation, although we stress it can only be a springboard for escalating the action both inside Hong Kong and for appealing to the Chinese masses. This is something the pan democratic leaders never do, because it would anger Beijing and destroy any hope of negotiations.”

“Occupy Central (OC) may happen soon. Although now it’s an open question what form it will take. The leaders are talking about a ‘series’ of actions and a ‘long-term’ struggle. Actually, 30 years is already ‘long term’ for a struggle. The occupation was a very popular idea because many people realise that ‘a series’ of protest marches has already been tried and is not enough. In our opinion the OC leaders have delayed too often, and this is one reason why Beijing has taken such a hardline position. The occupation could have really shaken the government had it been launched much earlier, as we proposed. It could have been a mass launching pad for strikes and other forms of mass resistance. Now, the task is to build the struggle from the bottom up, to build strike committees in schools, and try to spread this to workplaces. The movement needs to be democratic, not just a few self-appointed leaders deciding what’s next.”

What is the aim of socialists in this struggle for democracy?

“We support and fight for democratic reforms, even limited ones, that put the working class in a stronger position to fight for its rights – such as collective bargaining, a universal pension system, a 40-hour work week, and to stop the outsourcing mania. The main demand of the recent protests was for ‘public nomination’ and we support this, even though it does not go far enough in our opinion. We are the only organisation that calls for the CCP’s nomination committee to be scrapped. But even this is a partial reform, it doesn’t add up to full democracy – we need to explain this!

“We warn that capitalism in Hong Kong and China fights against democratic reforms. The pan democratic leaders call for a system that fits ‘international standards’ while we point out that the election systems in Europe and the US for example are far from democratic, because they’re dominated by Big Business pro-austerity parties. But the Hong Kong and China capitalists are against this ‘Western model’ with all its undemocratic features. They stand for continued CCP dictatorship because this guards their profits and has been very good business for them.

“This is proof that Leon Trotsky was right, with his theory of the permanent revolution, that the capitalist class in the colonial and ex-colonial countries is incapable of leading a bourgeois democratic revolution. This is also shown by the weakness of Hong Kong’s bourgeois ‘opposition’ and its political adaptation to the CCP dictatorship.

“For socialists the key force for change is the working class in Hong Kong, and especially in China. We campaign for an independent working class political party that must link revolutionary democratic demands with the need to break with capitalism. These demands include abolishing all the dictatorship’s undemocratic controls (such as the nomination committee and also the unelected ‘functional’ seats in the legislature), for immediate and full democracy and the end of one-party rule. We want to replace the current rubber-stamp legislature in Hong Kong with a real, fully democratic, people’s assembly with the power to take over the big companies and banks, to raise wages especially the minimum wage, and increase investment in healthcare and public services. This would get a great echo among workers in China, and when that happens the days of the one-party dictatorship are numbered.”