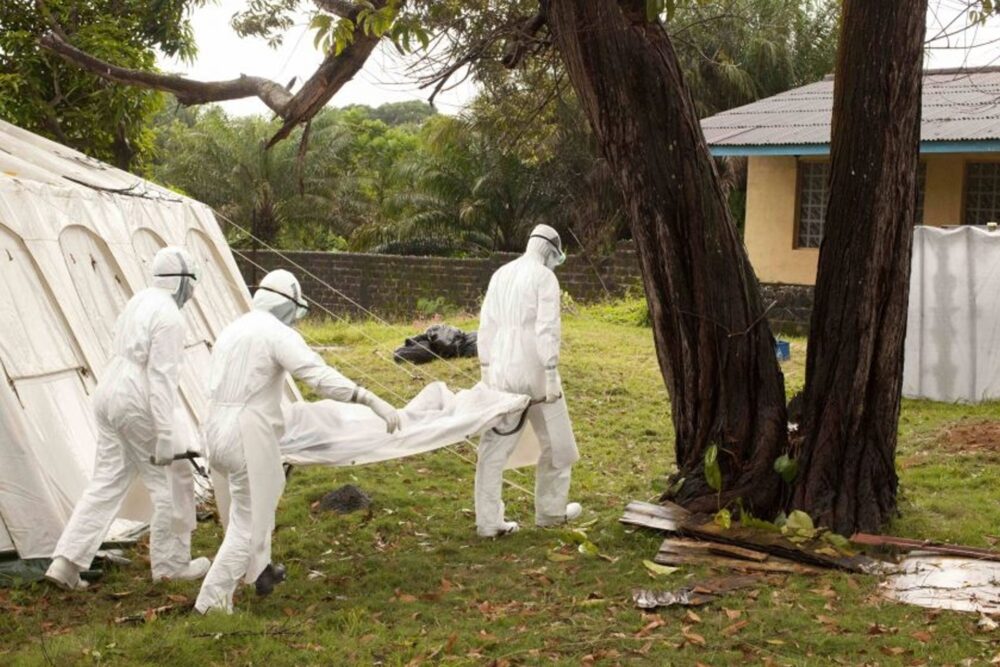 These horrific scenes are spreading across West Africa. Ebola virus has brought terror to Guinea, Liberia and Sierra Leone and threatens Nigeria, Senegal and beyond.

Since Ebola virus was discovered in Congo in 1976 there have been seven outbreaks in East Africa. Two of these were in 2012, giving warning that a major outbreak could soon occur. Yet all governments were ill-prepared when this outbreak began.

The death toll has passed 2,000 – more than all previous outbreaks combined. 42% of deaths have occurred in the past month. This epidemic is out of control.

Yet Ebola is a tiny killer compared to malaria and tuberculosis, which both kill several million each year. But there is no preventative vaccine or cure and it is highly infectious.

Crisis measures are urgently needed. But the governments of all the affected countries are completely incapable of carrying these out.

Health services are at breaking point. Kailahun in Sierra Leone has just four ambulances for almost half a million people. Heroic nurses, doctors, gravediggers and other frontline workers lack enough personal protective equipment to prevent them becoming infected – and infectious – themselves. Nurses in Liberia have been on strike demanding protective clothing and higher pay.

The World Health Organisation estimates $600 million (£366 million) could stop the epidemic. This is just 0.034% of annual world military expenditure (2013 figures). When governments talk of ‘defence’ spending, who and what are they defending?

Pharmaceutical companies make massive profits. They have not developed preventative vaccines or treatments for Ebola – a rare illness needing treatment for just a few days, hitting people too poor to buy drugs.

Of more than 1,500 new drugs that came to market between 1975 and 2004, just ten were targeted at tropical infections that killed millions each year.

Shareholders’ profits mean selling drugs for long-term conditions to patients paying high prices, either directly or through tax-funded health care, like the NHS.

Potential Ebola treatments are now being belatedly developed. Rushing untested drugs through that were subsequently found to have serious side-effects could increase distrust of medicines already associated with neo-colonial exploitation and corruption.

Immediately needed is massive investment into health care – training and equipment to ‘barrier nurse’ patients and prevent them becoming dehydrated. Clean water is vital for hygiene and infection control.

A public health programme, including health education, is needed – not imposed by corrupt central governments or Western imperialism.

Viruses don’t stop at national borders. A coordinated international response can only be achieved on the basis of democratic socialist states cooperating together, in Africa and across the world.

Guinea, Liberia and Sierra Leone were all wracked by civil wars in the past 25 years. They are among the poorest in the world, despite being rich in natural resources. Centuries of imperialist exploitation have sucked huge wealth out of mines and plantations.

They spend more on interest charges to the World Bank and International Monetary Fund than on healthcare, education and infrastructure. ‘Aid’ comes with strings, demanding privatisation of health and other public services.

What little research into Ebola treatment that has been carried out has been funded by the US Department of Defence, concerned at the threat of bioterrorist attacks. In 2013 the Centre for Biosecurity of the University of Pittsburgh reported that monoclonal antibodies showed potential to treat infections such as Ebola.

Sales of these treatments could reach $62.7 billion in 2015. 75% are for cancer or conditions like rheumatoid arthritis requiring long-term treatment. The only one developed for an infectious disease is for premature babies, who need six months treatment.

In 2012, these drugs cost up to $25,000 per patient a year. Changing manufacture methods could potentially cut costs by nine tenths. But “this is not currently a priority for commercial industry,” reports the Centre for Biosecurity.

The whole industry must be publicly owned and democratically planned for need – not profit.