TPP: A big business pact against the Asia-Pacific working class

The agreement reached on 5 October in Atlanta between the Obama administration and representatives of 11 other countries sees the launch of the Trans-Pacific Partnership. Supporters of the TPP say it covers economies that count for 40 percent of global GDP. But the TPP goes far beyond a ‘trade pact’, involving elaborate mechanisms to enforce monopolistic patent agreements and give multinational companies unprecedented new powers against national governments and ‘meddling’ regulators. The TPP consists of Australia, Brunei, Canada, Chile, Japan, Malaysia, Mexico, New Zealand, Peru, Singapore, the US and Vietnam.

The TPP is also a blatantly geo-political pact to boost the waning economic power of the US and Japan across Asia at the expense of China. It is an attempt to construct an economic bloc to underpin the new military alliances that are behind the rebalancing or ‘pivot’ of US imperialism on the Asian continent. The ‘pivot’ is the US response to China’s growing economic, financial and military power. Both camps are flirting with potentially disastrous consequences by boosting right-wing nationalism and an arms race across the continent. 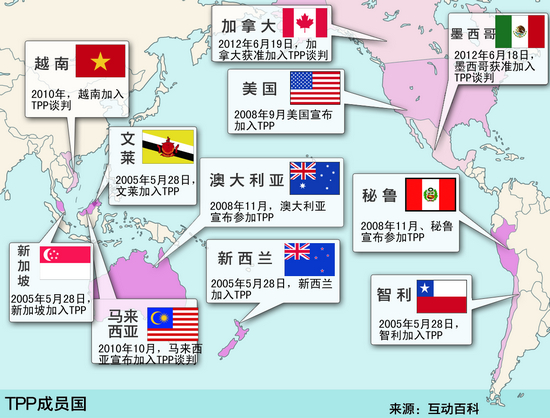 Many obstacles lay ahead for TPP which has yet to be ratified by any of the member parliaments (although several TPP states are dictatorships or semi-dictatorships so this is less of an obstacle than it might appear). More to the point, popular resistance can grow once the full impact of the pact and what it will mean for jobs, drug prices, the environment, and state-owned companies, become public knowledge. Even Japan’s right-wing leader Shinzo Abe says the deal signed in Atlanta is “just the start”. His government plans to use the TPP as a battering ram to push through structural reforms which the Japanese and international capitalist class have long demanded, aimed at undermining the position of workers, the public sector, and small farmers.

Paradoxically, the TPP could face the biggest opposition inside the US, where already there is considerable popular opposition, as expressed in the presidential campaign of ‘socialist’ candidate Bernie Sanders. This pressure has even forced the Democratic Party front-runner Hillary Clinton to say she opposes the TPP!

The following article, by James Langdon of CWI Taiwan, was first published on chinaworker.info in August 2014 under the headline Obama’s TPP: Taking neo-liberalism to a new level.