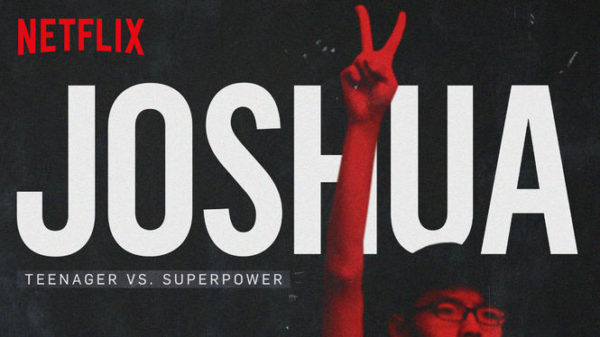 This documentary by US screenwriter and director Joe Piscatella profiles 20-year old Hong Kong politician Joshua Wong Chi-fung. The film follows him from the age of 14 when he started the secondary school student group Scholarism and fought against Beijing’s national education plan. Wong is an important political figure in Hong Kong, but unfortunately the film’s slant is so overly personal and uncritical that it forfeits any attempt at a deeper analysis of the conflict between the democracy movement and China’s dictatorship.

“The story of one teenager who spoke up,” says the film’s promotional poster, showing its desire to focus on one individual ‘hero’ rather than give a more complex but realistic view of a struggle that has moved millions. This is a shame because, with the movement now on the back foot having suffered setbacks since the highs of the 2014 Umbrella Revolution, a more penetrating and critical approach would have produced a much better film.

‘Joshua: Teenager vs. Superpower’ has met with overwhelmingly positive reviews from its target audience which is overseas. It won an Audience Award at the Sundance film festival in January. I suspect this has more to do with sympathy and respect for the mass movements in Hong Kong than the film itself.

Joshua Wong emerged as a representative of mass protests at a surprisingly young age. He and other leaders of the 2014 movement currently face politically engineered court proceedings that could result in long prison sentences. In the film he confesses he is not ready for prison – who would be? But the Hong Kong struggle as a whole has reached its current stalemate because activism and civil bravery are not enough. Youth is a big asset but also not enough.

The Umbrella Revolution lasted 79-days but then exhausted itself because it was not able to go beyond a very limited reform agenda that explicitly stopped short of challenging the right of “the Superpower” to stay in power.

An all-too-narrow focus on Hong Kong and refusal to even mention the system of capitalism which nourishes and sustains the Chinese dictatorship – these are what politically handicapped the Umbrella struggle. This is the failed programme of the ‘old guys’ of the pan-democratic hierarchy, with their fear of mass struggle (personified and played to perfection by liberal professor Benny Tai Yiu-ting in this film as in real life).

But student leaders like Wong, who emerged as part of a mass reaction against the spinelessness of the pan-democratic elite, unfortunately offer only a younger, angrier version of the same flawed ideas. The film gives no hint of disagreements inside the struggle, with one exception: Wong criticises Tai, rather gently, for wanting to organise the Occupy struggle like a “ceremony”.

Tai’s sins were much greater, unfortunately. His group insisted on control, undemocratically, and then to delay and eventually call off the Occupy struggle. Tai opposed the students’ one-week strike in September 2014 (this strike rather than Tai’s Occupy Central became the spark for the Umbrella Movement). Tai was booed and whistled by the students on the eve of the Umbrella Movement (not shown in the film).

Similarly, the “Scholarism Farewell Party”, when Joshua Wong disbanded the group to “form a political party” (Demosisto), is filmed but nothing is explained. A political party and a school student movement – if it’s the genuine article – shouldn’t be mutually exclusive.

Scholarism was very top-controlled by Wong’s small group and so was the decision to kill it off. Some youth who joined Scholarism during and after the Umbrella Movement were influenced by localist pro-independence ideas and that became a problem for the leadership. So they chose to close it down!

The most used word in the film is “Hong Kong”. This local short-sightedness can become a political straitjacket for the anti-authoritarian struggle. China’s despotic regime won’t be defeated by people in Hong Kong alone, so which allies should we seek out? Capitalist politicians like Trump – as Joshua Wong has suggested? Or the oppressed peoples of the world, including the masses in China and those fighting against brutal and undemocratic capitalism in the West.

In the film Joshua Wong says, “I will never stop until Hong Kong is Hong Kong again”.  Statements like this tells us the city’s democracy struggle desperately needs new ideas.

World Perspectives: Opportunities and Dangers in the “Age of Disorder”