It has been dubbed by some as the “Trojan train” because for the first time it legitimises the presence of Chinese police and security officials in the heart of Hong Kong.

But even before the political and objectively authoritarian aspects of Hong Kong’s new high-speed rail link became known, this was a project steeped in controversy.

Environmental groups, villagers, and the city’s democratic opposition parties, have from the start opposed the high-speed rail link as a costly white elephant. It began in 2008 with the government projecting a cost of HK$39.5 billion for the Hong Kong section of the railway, already kilometre for kilometre the most expensive rail project in the world.

Construction started in 2010 and it was supposed to be finished in 2015. The cost has since ballooned to HK$84.4 billion (9.2 billion euro) and the opening date has been pushed back three years. Construction work encountered flood problems and other technical glitches.

Just 26 kilometres to the border with mainland China, the construction cost for the Hong Kong section of the railway has been a staggering HK$3.2 billion (350 million euro) for each kilometre of track. This exemplifies the policies of the Hong Kong government and capitalist establishment which turn a blind eye to chronically underfunded health and education systems, and the absence of a universal pension system, in order to offer massive financial welfare to Hong Kong’s property tycoons in the form of endless largely unnecessary government-funded infrastructure projects.

The government insist the new train service will be an economic success, targeting 80,000 users per day. This is highly doubtful. At the opening of the new high-speed line on Sunday 23 September, 70,000 passengers boarded, with ticket sales beginning two weeks earlier. Two days later, the number had dropped to 38,000.

There have been numerous technical problems causing long queues, which was hardly the start the line’s operator, MTR Corporation, and the project’s supporters had wanted. MTR has so far not managed to integrate its ticketing system with that of the mainland side’s operator, China Railway Corporation. Clearly, an 8-year incubation period was not long enough to sort out such issues.

Tickets bought to 44 mainland cities via mainland ticketing websites cannot be obtained from MTR’s ticket machines inside the unbelievably grandiose West Kowloon railway terminus. To make matters worse, some of the MTR machines were turned off as long queues formed on the opening day. Luggage has emerged as an even bigger problem. Several passengers were forced to re-pack their belongings into shopping bags and leave their suitcases behind due to more restrictive baggage rules than those that apply on other Hong Kong train services. The MTR has even suggested that heavier luggage may need to be sent separately by another company and mode of transport.

While the media has not given much attention to these “teething problems”, passenger dissatisfaction on the first day of operation forced Hong Kong’s transport minister Frank Chan Fan to appear and call on the public to be “more tolerant and supportive of the line” according to the South China Morning Post. 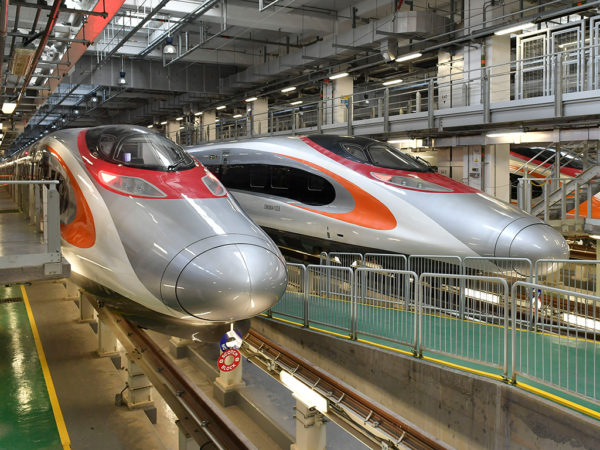 Several media groups ran tests on Sunday’s opening day to see how fast the new service is in comparison to the many already existing options to reach Guangzhou, the capital of neighbouring Guangdong province, 119 kilometres from Hong Kong.

The South China Morning Post sent out six teams and found the high-speed rail was the fastest by just 13 minutes – taking 3 hours and 28 minutes to do the journey to central Guangzhou as opposed to 3 hours and 41 minutes by taking the MTR (Metro) to the border and then changing in Shenzhen to a regular express train. There is also an older conventional direct railway line to Guangzhou from Hong Kong and in the Post’s test this was just a fraction slower, at 3 hours 44 minutes.

Doing this journey on the new high-speed rail link cost HK$369 one-way compared to HK$141 using the MTR and changing in Shenzhen. The time saved is negligible in other words considering the new line is two-and-a-half times more expensive than the cheapest option. This is because it is not just the time spent on the new high-speed train itself but the location of the stations, accessibility and local transport connections at either end. The purpose-built Guangzhou South station, to which Hong Kong’s new high-speed service runs, is 23 kilometres outside Guangzhou city centre.

Even Chief Executive Carrie Lam Cheng Yuet-ngor said she preferred to take the plane to the high-speed train to go to Beijing. The new train is also more expensive than air travel to Beijing.

Hong Kong’s government has a track record of unbridled profligacy when it comes to infrastructure projects that it – repeatedly – claims will be economically viable and socially valuable but which then fail to live up to hype. The third runway at Hong Kong’s Chek Lap Kok airport is one such project set to cost HK$141 billion despite the fact the two existing runways are not operating at their full capacity. Hong Kong airport is competing with other nearby international airports (Shenzhen and Guangzhou) and now also the high-speed rail link.

The monster Hong Kong-Zhuhai-Macau bridge, the world’s longest sea bridge, is another worthy competitor for the title biggest white elephant. Like many other infrastructure projects there are concerns over construction scams and safety in addition to the waste of public funds on projects with little societal value. This year a major scandal was exposed with contractors faking safety reports and substituting metal cylinders for bricks in order to meet a deadline.

Hong Kong’s share of the bridge’s construction costs is HK$110 billion. Shenzhen, which missed out when the plan for the Hong Kong bridge was hatched, is building its own Shenzhen-Zhongshan bridge further along the Pearl River Delta which will compete for traffic.

Hong Kong is also the only place in the world where Disneyland is a state-owned company (the government owns 53 percent), because the Mickey Mouse outfit has yet to turn a profit in the city. This year Hong Kong Disneyland’s annual losses doubled to HK$345 million.

The list of government wastefulness goes on and on. What’s missing is the transport and infrastructure investments needed by ordinary people – public housing, more hospitals and care homes for the elderly, an entirely new fleet of non-polluting buses and major investment in green energy. But the chokehold over the economy exercised by a dozen or so tycoon families, with their banks and subsidiary companies, means that government finances are used like an ATM by billionaire developers.

Most controversy over the new high-speed railway has centred on the “co-location facility” or joint checkpoint, which comprises a huge China-operated border control and customs area inside the West Kowloon station. The politicians have justified this in the name of “convenience” and “time saving”, but it is a historic departure in that it allows mainland police and security officials to operate openly in Hong Kong for the first time.

China’s de facto police station in West Kowloon is a truly gigantic facility – 105,000 square metres, around 60 percent of the size of London’s Wembley football stadium. The area will be subject to mainland laws which means for example that should you be arrested after crossing into the mainland sector you should not assume you will be allowed a phone call or a lawyer, rights that are enshrined in law on the Hong Kong side of the barrier. The trains too are subject to mainland laws which include severe restrictions on what content can be accessed via the internet – so check your Facebook before entering!

In addition, the China-based Wi-Fi provider at the West Kowloon station has stated that users’ information can be given to Chinese authorities. This information was quickly deleted amid growing public concerns.

The China-controlled section of the station includes detention cells. Media reports also recently revealed the existence of a “secret floor” not previously reported in 14 public documents issued by the government over the past three years about the plan for the terminal building and co-location facility. Carrie Lam’s government now says these are “maintenance areas” but has not explained why their existence was not disclosed before.

The democracy movement in Hong Kong fears that in addition to its role as a hugely expensive vanity project that glorifies China’s tightening authoritarian grip over the city, the railway and its co-location facility are a highly political “Trojan train” that brings mainland police and mainland laws into Hong Kong.

The Hong Kong government spent long months trying to concoct a “legal” pretext for the co-location arrangement, which clearly contradicts the city’s Basic Law, only for the Standing Committee of China’s pseudo parliament, the National People’s Congress, to decide the issue under the mainland’s constitution which it said, “cannot be challenged”. This was another powerful political signal that put another big dent in the Hong Kong capitalists’ claims to uphold “rule of law”.

Despite the dictatorship and Hong Kong’s sycophantic establishment getting their train, the project could run into many “red signals” in future. If passenger numbers don’t match up to the optimistic projections this will be politically damaging, reinforcing widespread anger over white elephants at the expense of the public good. Any political incidents involving pro-democracy supporters taken by police on the Chinese side of the station terminus could also spark an outcry.

The response of the pan-democratic parties has been low-key over this issue, with no serious attempts to take the issue to the streets and mobilise opposition. Their attitude has been similar on almost all issues since the Carrie Lam administration stepped up its political repression more than a year ago. An opportunity was missed to launch a mass boycott campaign against the new line, which is more expensive, not so much faster, and seemingly a lot more complicated, compared to existing alternatives. Most Hong Kongers are anyway likely to vote with their feet.