The government’s prosecution of the “Occupy 9” was a show trial, the aim of which is to criminalise the democracy struggle in Hong Kong

The trial and sentencing, four years after the events, of nine prominent figures in the 2014 Umbrella Movement, are a blatant exercise in intimidation by Hong Kong’s viciously anti-democratic government. True to form, pro-government figures are screaming that the sentences are not harsh enough! 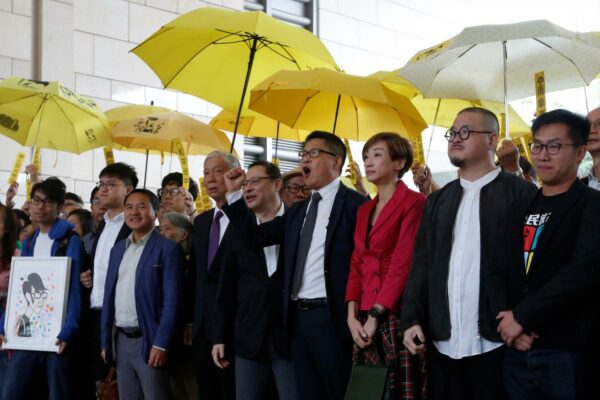 The judgment is clearly political. It effectively says the sustained police tear gas attack which actually ignited the Umbrella Movement was caused by sedition and that civil disobedience can never be justified to break repressive laws. More and more people are seeing the courts as tools of the government.

The ‘Umbrella Revolution’ lasted for 79 days in autumn 2014, the longest continuous occupation of a major city in the world. Up to 2.3 million people participated in demonstrations and rallies. This was preceded by years of political battles, mass mobilisations, election challenges by pro-democracy forces (pan-democrats) demanding one person one vote instead of Hong Kong’s current autocratic system with a Chief Executive and government hand-picked by the Chinese dictatorship and its local satraps.

When the Umbrella protests ended, without securing any political concessions, the government and the Chinese dictatorship went on the offensive, demanding tough repressive measures against the democracy movement, especially its most radical components such as the LSD of ‘Long Hair’ Leung Kwok-hung, student groups and some pro-independence ‘localists’.

The eight-month jail sentence for legislator Shiu Ka-chun means he cannot run in elections for the next five years and could now be disqualified from his Legislative Council seat. Shiu would in this case become the seventh opposition legislator to be purged.

Five of the defendants were found guilty of “sedition”, a charge created by the British colonial government, which can now be used to further suppress freedom of speech in Hong Kong. The case establishes a precedent that those who publicly express support for or encourage other people to go to streets can be charged with sedition. The ‘Occupy Three’ (Tai, Chan and the 75-year-old Chu Yiu-ming whose sentence was suspended on health grounds) were portrayed by the court as the real leaders of the Umbrella Movement. This is completely untrue.

The movement was initiated by students and youth in opposition to the three who, in close connection with the ‘moderate’ (right-wing) pan-democratic leaders, were by late September 2014 doing their utmost to rein in and limit the struggle. Tai admitted this at the trial:
“The firing of tear gas in such a way was something that no one could have known. Matters were no longer in our control,” he told the trial in December. “By then, the most important thing we wanted to do was to bring everyone home safe.”

The 268-page judgement by Justice Johnny Chan called Tai and his associates “naive” for hoping that a more limited and tokenistic occupation would cause the authoritarian regime to fold:
“It is naive to suggest that a concession to introduce the form of universal suffrage … could be made by the government overnight with a click of the fingers.”

Real events however overtook the cautious perspective of the ‘Occupy Central’ leaders. The Umbrella Movement took on a scale and determination they had never imagined.

The 130,000-strong demonstration on April 28, also spurred by anger over these jail sentences, shows the vulnerabilities of the government’s crackdown. Socialist Action calls for the release of political prisoners and the re-building of the mass democracy movement, which needs to learn the real lessons of the Umbrella Movement.