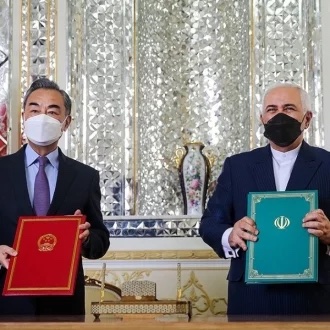 The recently signed 25-year agreement between Iran and China further increases and exposes imperialist tensions between the US and China. It shows the increasing influence of China in the Middle East and the decreasing importance of US-imperialism particularly in this region. Although the final details of the deal have not been yet announced, previous drafts suggest China is to invest up to $400 billion in Iran’s economy over the next 25 years in exchange for a discount on oil supplies from Iran. The bulk of this investment will be focused on the oil and gas sector.

Iran is also said to have pledged significant economic concessions to China for an almost monopoly entry for example into technology markets, as well as to implement China’s security strategy for the belt and road initiative. With increased military cooperation, Iran is set to become a major customer of Chinese military weapons in the Middle East.

It’s hard to predict the actual effects of the agreement inside Iran, especially because the hard facts have still not been fully revealed. But a large influx of Chinese capital poses the question of whether Iran’s state-owned companies could be opened up for privatization or if, in general, the presence of Chinese capital could push back the market share held by “domestic” companies. This could lead to even more class struggles over privatization, workplace conditions and so on, as well as an increase of conflicts within the regime itself. The fact that parts of the ultra-hardline factions of the regime, connected to the Islamic Revolutionary Guards Corps (IRGC), which controls large parts of the energy sector for example, opposed this deal is just one indication of this. Of course, the agreement is still at an early stage, and it has yet to be seen how the implementation of the deal develops.

While some bourgeois analysts tend to exaggerate the real extent of the deal, its main and immediate effect is not so much concerned with its economic aspects, but rather with the political strategies of both sides in the context of global capitalist crisis and shifts in international relations.

Contrary to some assumptions, this agreement won’t bring new economic growth and economic investment with massive reconstruction and employment in Iran. In the face of growing international isolation and pressure by the US, which is not being reduced with the new presidency of Joe Biden, the Iranian regime sees the political partnership with China as a necessary counterbalance. In addition, with massively shrinking oil exports in the last years, the regime is also facing a historically big budget deficit, which will, and has already, increased inflation.

With working class struggles both on political and economic issues increasing in the last years, the overthrow of the Islamic regime is a serious and real threat. The regime is seeing its own survival as one of its most fundamental questions. The regime is trying to play on the rift between the world powers in order to get out of its economic stagnation, and avoid a serious political and social crisis. Poverty, hunger and acute economic problems are rampant. The COVID crisis has been dramatically mismanaged by the regime and the government estimates that over 60.000 people have died of COVID-19. Independent assessments suggest that the real figures are around four times higher.

False friends and the need for an independent working class answer

The deal has not only increased tensions within the Iranian ruling class as ultra-Islamist forces try to use their opposition to whip up nationalist propaganda, but it has also triggered widespread controversy within those forces inside and outside Iran, which oppose the regime. A campaign called “No to the Islamic Republic” (#No2IR) which opposes the agreement, calling for a boycott of this year’s elections, has recently gained momentum. It is dominated by celebrities and monarchists, Reza Pahlavi, Iran’s former crown prince being one of the most prominent figures in the campaign. The aim of these reactionary, monarchist forces in opposing the agreement is not to defend the interests of the workers and poor, but to act in their own interests and in the interests of Western and US-imperialism. For example, they claim that the Iranian regime has “auctioned Iran’s natural resources and national wealth to China”.

This type of nationalist propaganda is particularly dangerous because it takes up justified concerns within the working class about foreign economic interventions. After the signing of the agreement some protests have been held by workers in various Iranian cities under slogans like “We are not selling Iran”, and also in other countries by the Iranian community in exile. These protests have a nationalist outlook, and although they don’t have a major impact at the moment, they still represent both a mood against any policies and measures taken by the government, as well as opposition to any form of foreign intervention. But as the propaganda of pro-imperialist forces with campaigns like #No2IR grows, they contain the danger of increasing illusions in Western imperialism, which shouldn’t be underestimated.

It is very clear that the nature of the deal is to further the interests of the Chinese and Iranian regimes and ruling classes in order to stabilize their rule. As an economic giant, China, like other imperialist powers, is seeking to expand with the exploitation of cheap labor, and access to commodity markets, energy and raw materials. There should be no illusions: The performance of Chinese companies and capital is no different from that of western companies and capital in Iran. All western and eastern companies that operate in countries like Iran do so with harsh working conditions and exploitation of workers. There are no serious differences between whether Chinese, Russian, American or European capital, or whether there is a combination of foreign capital with “domestic” capital in Iran.

The worker’s movement in Iran should avoid falling into the trap of seeing either Chinese or US imperialism as offering a real liberation for the working class and poor, and oppose the dangerous effects of monarchist, nationalist and bourgeois forces, which try to use this agreement to further their own agenda. To overthrow the Iranian regime the working class must take an independent standpoint to oppose the regime as well as the capitalist system itself.