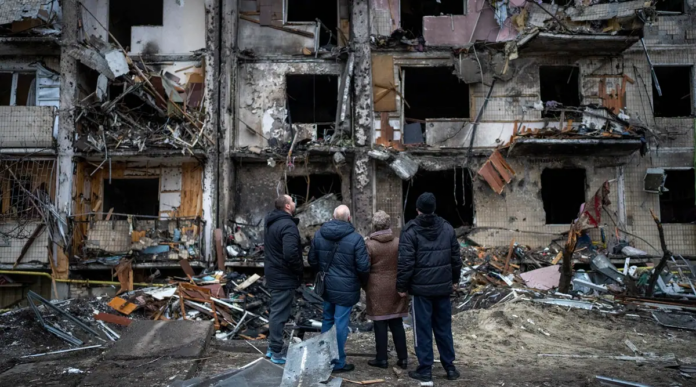 ISA expresses its full solidarity with the people of Ukraine who already suffer exploitation, oppression, corruption and growing poverty conditions, and now face the horror of war and bloodshed.

As Russian troops and tanks have crossed the border into Ukraine, the first people have already been killed. Missile attacks have hit military bases and airfields including in Kyiv. There are already reports of shooting in residential areas of Kharkiv, Ukraine’s second largest city in the northeast of the country.

Russian troops should be immediately withdrawn from Ukraine.

The recognition of the Luhansk and Donetsk People‘s Republics by the Russian Duma and its subsequent approval by Putin, followed by their call for Russian assistance created the immediate pretext for the invasion. Hostilities have reached a new and horrifying peak after weeks of escalating sabre-rattling between Russia on the one side and NATO and the US on the other.

Europe is staring down the barrel of a major armed conflict, which is tied up with the manifold geopolitical contradictions of the new age of disorder. Socialists internationally must step up our work, and prepare to take a stand against imperialist wars and for working class internationalism, in principled opposition to all forms of imperialism.

Russia has been claiming its security is under threat by the eastward expansion of NATO with weapons and troops along its borders. But now President Putin claims that the task of the Russian attack is to “demilitarise” and “denazify” Ukraine. But his attacks will only make the Ukrainian people more angry. Many will take up arms to oppose his troops.

Putin has justified his attack by claiming that Ukraine’s independence was just a result of the Russian Revolution and the Bolshevik’s policy of granting the right of self determination to oppressed nations, a policy that was opposed by Stalin and the bureaucratic regime from which Putin himself emerged. This is an important lesson. Independence can not be reached by appealing to NATO or the EU, but only in a common struggle against the new Tsar and his war.

The population which will suffer most from a war, those who will risk their lives and limbs, the lives of their sons and daughters, mothers and fathers, their homes and incomes — those ordinary working class people living in Ukraine — have been reduced to mere spectators whose fate is decided by forces outside of their control.

Today’s Ukrainian leaders, the capitalist establishment, whose sole concern has always been the defense of the interests of the oligarchs and who have steered the country from crisis to crisis since its independence, sold themselves to the west during the previous decade. In this way they hoped to gain NATO protection, and gain economically by moving closer to Europe. They failed on all counts: average family income today is 20% below the level of 2013 and protection by NATO will not depend on the interest of the Ukrainian people but on US and NATO allies’ economic and geopolitical interests.

The economic shocks of the war too will be felt across the world — already stock markets are reacting — the Russian market fell by 40% before being suspended. Energy prices as well as food prices will escalate, adding to already strong inflationary pressures in the world economy. And future generations across Ukraine and Russia, who already live with low incomes, with poor health care will have to pay the cost of the war.

This war has the fingerprints of the US-China conflict for world domination all over it. The Biden administration stated openly that China is its “main competitor” and Russia “the most dangerous”. Within NATO, the US has been pushing its European allies for years to increase their war budgets. War is the continuation of politics by other means. Among the current motives of the US is to strengthen the ties between US and European imperialism in a pretext for future conflicts with China — all at the expense of the Ukrainian people.

NATO has been stepping up its presence in Eastern Europe with bases in Poland, Romania, which border the former Soviet Union and and the three Baltic states, which were even part of it. NATO countries have been arming Ukraine to the teeth. Having cried wolf for weeks now, predicting a ‘false flag’ operation by the Russians, Biden and his warmongering allies have created a self fulfilling prophecy. Regardless of the degree of NATO’s direct involvement in the unfolding war, Western imperialism shares responsibility for stoking up a conflict, which will see working class families mourning their fallen relatives and paying the heaviest price for the war effort and its economic fall out.

Russian imperialism has calculated that now is its moment to make a decisive move to further its interests. US imperialism is weakened and the European Union struggles with internal division and China is becoming US’s major concern in the reshaping of the world order. Putin violates the right of self-determination of the Ukrainians, he considers Ukraine an integral part of Russia, similarly to Xi’s claims over Taiwan.

The importance of what happens in Ukraine goes well beyond the borders of Ukraine. Economic crisis, waves of reactionary nationalism and potentially millions of refugees will create more global crises, just when it seemed the pandemic was entering a new, more manageable phase.

Despite being a brutal authoritarian regime, the Kremlin still has to take into account whether Russians will accept a major war over Ukraine. 2022 is not 2014, when a massive patriotic wave resulted from the take-over of Crimea. With no heart for a war against Ukraine, most Russians are already grappling with lower living standards, escalating inflation and, during the pandemic, over a million “excess deaths”. One opinion poll (23/02/2022) suggested that 40% of the Russian population, mainly the young and urban population, are against the recognition of the republics, which has been used as a pretext to launch the war.

Russia is a military giant, but its economy is only about 6% of NATO’s economies taken together. Its GDP is smaller than Italy’s. Heavy sanctions and a war effort could hurt the economy very badly and combined with Russian war victims, further deepen the growing mistrust in anything the government says. Putin may be glad he has support from Beijing, but if a prolonged war drains economic resources, he could well have to ask Xi to bail him out.

It is the working class and poor who pay. When the top 500 oligarchs in Russia have seen their wealth grow by 45% during the pandemic to reach $640 billion, losing a few billions from frozen bank accounts is not going to make a big difference.

This war has little or nothing to do with protection of any of the populations concerned. NATO had and has no problems with dictators when it suits them, and Putin supports the most right wing parties in Europe — so much for “antifascism” or “defending democratic rights”. War will mean terrible human suffering, will be paid for in lives being squandered, economic hardship, more refugees and won’t solve any of the existing problems and inter-imperialist tensions. Despite claims to the contrary it is not in the interest of working-class and ordinary populations in any of the nations involved.

We cannot rely on any of the imperialist institutions or war machines involved to create peace, let alone prosperity. Indeed, for years Ukraine has been asking for real assistance from NATO and the west yet has been denied. We should have no trust in these imperialist bodies. Any ‘diplomatic solution’ agreed between them, while it would be welcomed initially by people worldwide, will ultimately be at the expense of ordinary people and only prepare the ground for further tensions and confrontations. These powers have proved incapable of tackling the health and climate crisis for which they are responsible, are unwilling to combat the rising cost of living for ordinary people and now their war will make things even worse.

The only force capable of stopping war and destruction is the united working class. ISA calls on the workers’ movement worldwide to initiate a massive international anti-war and anti-imperialist mobilisation, including refusal to handle the production and transport of weaponry as well as strikes, while also raising social demands capable of offering a real way out for the majority. This could include united action by workers in multinational companies operating in various countries directly involved.

This will not be an easy undertaking. We will have to stand against massive propaganda machines on all sides, and it will take time and unfortunately suffering, before conditions will expose the propaganda and bring the real issues to the fore. War however, is the midwife of revolution, it exposes contradictions in the most visible and tangible way possible. Timely and bold initiatives at the early stages of wars are crucial in determining the nature and programme adopted when a movement gains strength.

This war is not in the interest of workers and youth, wherever they live. It’s about geopolitical and economic imperialist ambitions. ISA will oppose the war wherever we are present, in Russia, the USA, Ukraine and elsewhere. In particular, we stand with youth and workers in Russia in their appeals to fight the war by building an anti-war movement in the workplaces and universities, for solidarity against the warmongers, and for a war against poverty, and not against other peoples.