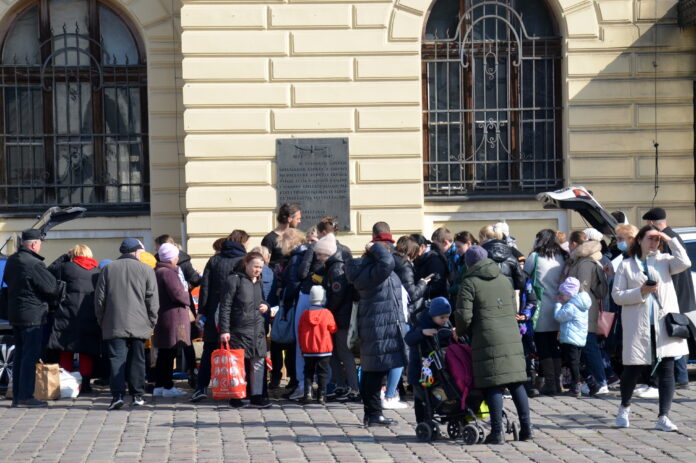 It is only thanks to the massive outpouring of solidarity with the refugees on the part of ordinary Poles that a humanitarian tragedy has so far been avoided in Poland.

In just two weeks of the Russian invasion of Ukraine more than 2 million refugees have fled the horrors of war. At the time of writing, over 1.4 million of them have come to Poland, 200,000 to Hungary, 150,000 to Slovakia, 100,000 to Russia, 85,000 to Romania, and 82,000 to Moldova. Due to Ukraine’s ban on men aged between 18 and 60 from leaving the country, almost all of them are women and children. According to estimates of the UN refugee agency, the number of refugees could swell to over 4 million in the coming weeks.

In response, Poland and other EU countries have opened up their borders to Ukrainians seeking refuge and simplified entry requirements. While we welcome this, we have to point out the hypocrisy and racism of this move in the light of the policies and actions of these governments during the 2015 refugee crisis and the crisis on the Polish-Belarusian border at the end of last year.

In 2015, the Hungarian government closed its border to Serbia, building a fence to keep refugees out. The Polish authorities also refused to accept the EU quotas of refugees from the Middle East and Africa. However, these quotas themselves were racist. Indeed, the EU even paid Turkey’s ruler, Erdogan, to keep refugees out of Europe. Instead of showing solidarity with the refugees — in large part the victims of the invasions that Poland had participated in — Law and Justice, today’s ruling party in Poland, whipped up anti-muslim hatred and xenophobia among the Polish population.

In autumn 2021 another humanitarian crisis developed on the border of Belarus and Poland as thousands of refugees from Afghanistan, Iraq, Syria and Africa tried to cross the border. Poland refused them entry and with the encouragement of the EU pursued an illegal pushback policy, allowing them to freeze and starve to death in the forests in no-man’s land.

Racism against African and Asian students

Ukraine had a large population of African and Asian students, attracted to the country by the high teaching standards in the universities and cheap costs of obtaining a degree compared to other European countries. But since Russia’s military aggression against Ukraine, Africans and other people of colour have had problems evacuating the country. Firsty, there have been reports that they have been prevented from getting on buses leaving for the border, with Ukrainians given priority. Racial profiling on the Polish border has also made it difficult for Africans and other people of colour to enter Poland and other countries. They have been taken out of queues at the border by the Ukrainian border guards and made to wait while Ukrainians go through and have also been subjected to extended entry procedures on the Polish side.

While Ukrainians are treated as refugees escaping war, Africans and other people of colour are treated by the authorities as undesirable economic migrants. Ukrainians are automatically given the right to live and work in the European Union for up to 3 years, without having to apply for asylum. They will also have the right to social benefits and health care. However, non-Ukrainians fleeing the war in Ukraine will not have these rights and will have to apply for asylum. Several politicians have already made it clear that Ukrainian refugees are different from the ones that tried to get into the EU in the past, because these are “our” refugees, in other words, they are white and they are Christians.

The horror of war and the plight of millions of Ukrainians has shocked people throughout Europe. They have responded by collecting money, food, clothes and other basic necessities. This is particularly the case in Poland, where the Polish state has been unable to cope organisationally with the sheer number of refugees entering the country in such a short time. It has reacted slowly, incompetently, and bureaucratically. Media stunts and manipulating public opinion are more important to the powers that be than providing real care. Reports are coming in of the growing chaos at the official reception points around the country. For example, at Warsaw’s Torwar ice rink an official refugee reception centre was set up by the regional authorities. Over 500 camp beds were set up in the sports hall, but then volunteers were left to cope with the situation alone. They complain that the authorities are not supplying food or necessary hygiene products. Instead the volunteers have to beg restaurants to supply food and have to pay for essential medication such as insulin from their own pockets.

It is only thanks to the massive outpouring of solidarity with the refugees on the part of ordinary Poles that a humanitarian tragedy has so far been avoided in Poland. Polish citizens are providing transport from the border and sometimes even driving to Lviv or deeper into the country to pick up refugees and bring them to Poland. Not only are they providing food, clothes and other essentials, but many are also offering them shelter and places to live. The state has been by-passed, as numerous NGOs and social media groups have built aid networks to provide legal and practical advice for refugees, make collections, offer shelter or transport and link up people who want to help with people who are in need.

Jobs and homes for all

It is outrageous that the state forces refugees to depend on private help while the super rich get even richer. As the state does this, it is also responsible for increasing racism and will use refugees as a cover up of its policy of cuts. Refugees cannot rely forever on the feelings of solidarity and empathy of the population. Instead, there must be a well-organised response on the part of the state — something which so far is missing in Poland. Camp beds in sports halls and stadiums are only a temporary solution — refugees need decent housing, child care services and places in schools, as well as access to the labour market with equal pay and trade union rights. The money is there — we see the government has no problem finding the money to subsidise the church, boost defence spending, or give tax breaks to people who own palaces as part of the Polish Deal tax “reform”.

However, the war in Ukraine is expected to trigger further rises in energy and food prices, pushing inflation into double figures, while exacerbating disruptions in global supply chains. For example, Volkswagen has announced the temporary closure of two car plants in Poland due to lack of parts from Ukraine. Other car manufacturers are taking similar decisions. Rather than a post-pandemic recovery, the European and global economy faces a period of stagflation. On top of this, more and more governments are declaring they will double their defence spending, which will mean less welfare and higher taxes.

So far, the Polish government plans to “privatise” the solution for refugees. It will pay Poles who provide accommodation for Ukrainians 240 euros per month per person that they help, with no obligation to hand over this money to the refugees. This will put refugees at risk of abuse, especially as there is no possibility to check the standard of the accommodation that will be provided. For unscrupulous landlords, this could be a very attractive money-making scheme. Moreover, it’s not clear whether this money will be made available to people (or the refugees) who have already selflessly opened up their homes without waiting to go through the bureaucratic process of applying for the local authorities to assign them refugees.

Like the EU as a whole, the Polish government also intends to give Ukrainians access to its labour market, but only because there is a shortage of labour and it hopes that a large supply of Ukrainian workers will force down the wages of Polish workers. When the economic crisis begins to bite, the Polish government, like the other governments of Europe, will not hesitate to divide workers and blame the refugees for the crisis.

But this crisis is the product of a sick system — the same system that is destroying our planet, causing global warming, and responsible for imperialist rivalries and war. We need to get rid of this system and replace it with one based on cooperation and solidarity of working people, where the economy is organised not for profit and greed, but to meet social needs. The initiative and selfless solidarity provided to the refugees in the last weeks shows that it is possible to build such a society based on the organised working class.

We say, make all the oligarchs of the world, the super-rich and big corporations pay for the crisis and the costs of taking in the refugees. Let’s open up the accounts of the corporations to be inspected by trade unions and working people. Let’s check who is making profits from this imperialist war and let’s make them pay!

No to the EU’s racist refugee policies!

Open safe and legal routes for all refugees, whatever the colour of their skin and country of origin. This must also include the refugees trying to enter Poland and the EU from Belarus.

Refugee status for everyone leaving Ukraine, regardless of their citizenship or ethnic origin.

People who don’t want to fight must also have the right to stay in the EU — allow men between 18 and 60 years old into the EU, including “deserters” from the Ukrainian, Russian and Belarusian armies.

We demand access to decent housing, health services and work for all!

Expropriate houses and buildings that are left empty for speculation so that they can be used by all who need them — both refugees and Poles.

A guaranteed place in local kindergartens and schools, free of charge, for all children, including children of refugees.

Child and social benefits at a level to allow a decent standard of living — for everyone living in Poland.

The minimum wage and labour code must also apply to all Ukrainian refugees and other foreign workers in Poland. For trade union rights for all workers!

For a reduction in working hours to share out the existing work for all without a loss of pay.

Open up the accounts of all large companies — let the workers see which firms are making profits from the war!

We demand that the super-rich and corporations should pay for this crisis.