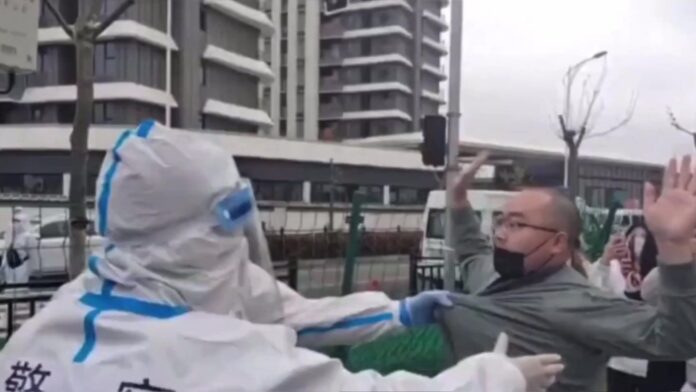 “Five more years!” This was the bombshell message from the CCP’s top official in Beijing at the end of June. Cai Qi is the CCP’s secretary in the capital. Cai was quoted saying draconian ‘Zero COVID’ restrictions would be maintained “for the next five years” in a report for Beijing Daily which was republished by other state media outlets. Within hours, as Cai’s remarks exploded across social media, the article was deleted. All references to “five years” were removed by censors. This was another stunning own goal by the so-called Communist dictatorship (CCP) and Xi Jinping’s own ruling faction (Cai is regarded as a member of Xi’s ‘Zhejiang faction’).

A seismic shift in the public mood has taken place in big cities like Beijing and Shanghai against the economic hardship and brutality of the CCP’s pandemic control policies. With the measures employed this year, the regime has gone “full Orwell”.

Rather than a temporary expedient, there are increasing indications that Xi’s regime intends to massively build-out its ‘Zero COVID’ infrastructure into a permanent quasimilitary system of social control. Cai’s gaffe only confirmed what we are seeing with our own eyes.

There are some features of the repressive techniques developed by the CCP-state in Xinjiang now being rolled out nationwide for use against the Han majority. This is sometimes described as “techno-authoritarianism”. Marxists warned that Xinjiang, with its ruthlessly oppressed Muslim minorities, has been used as a training ground for the dictatorship to develop methods of mass surveillance and control. These policies pose a serious threat to all workers and young people across the country.

Although the arbitrary and brutally enforced mass lockdowns of the ‘Zero COVID’ policy do not yet match the horror of Xinjiang’s mass detention and indoctrination programs, they nevertheless involve military-style enforcement, often on spurious medical grounds. Instead of Xinjiang’s camps and slave factories, there are the hated fangcang quarantine centres and for workers, incarceration in “closed loop” capitalist production lines.

The world’s second biggest economy is increasingly paralyzed. The official GDP data for the second quarter is likely to be manipulated even more than previously to give an illusion of growth. This is because Xi Jinping’s coronation project (lifetime rule, to be formalised at a ceremonial “congress” later this year), will be further compromised should the shockingly bad economic data be fully revealed.

Unemployment is exploding, with a report from Peking University warning it could reach the same level as in 2020, when the pandemic first hit. At that time, 12 percent of the labour force were unemployed – 93 million people – according to the report. Most economists caution that a quick V-shaped rebound from this year’s downturn, similar to that two years ago, is unlikely due to several factors.

One is the global situation, with recession risks looming over all major economies. China’s property meltdown and associated debt crunch increase the downward pressure. Hopes for a wave of “revenge shopping” by consumers in the second half of the year look shaky. For many, incomes and job security are lower than two years ago.

Those economists who hailed “the end” of China’s pandemic nightmare in June, when Shanghai’s lockdown ended (only very briefly as it turned out), had clearly been drinking a bit too much CCP propaganda. As others including chinaworker.info have warned, the government’s strategy is like trying to “nail jello to a wall” – especially with new highly transmissible subvariants of the coronavirus emerging.

Xi Jinping says China has the best pandemic policy in the world. His strongest propaganda card, however, is the atrocious performance of most Western governments following decades of neoliberal downsizing of healthcare systems and budgets. Now that vaccination programs and de facto “herd immunity”, acheived at monumental social cost, have allowed most advanced capitalist countries to exit their pandemic regimes, Xi’s nationalistic propaganda that “our system is superior” has a lot less bite. Chinese people compare their suffering with a world outside their borders that seems to be “back to normal”.

China’s pandemic death toll is very low by global comparisons, but there are a large number of unrecorded deaths as a result of non-COVID medical attention being denied during lockdowns. China also faces a mental health crisis of gigantic proportions as a result of locking down tens of millions of people in conditions akin to solitary confinement. Its healthcare system is woefully underfunded to deal with this crisis (8.9 mental health workers per 100,000 population, compared to 20.6 in upper middle-income countries as a whole).

The pandemic cannot be fought effectively by capitalist governments – whether authoritarian or ‘democratic’. Xi’s regime says opposing his ‘Zero COVID’ line means to do nothing or “lie flat”. That’s not how socialist see it. An effective fight against the pandemic needs strong independent workers’ organizations and full democratic rights.

Vaccination needs to be stepped up especially for the elderly through a mass awareness campaign and reversing the CCP’s import ban on messenger-RNA vaccines which have a much higher efficacy against COVID-19. Emergency restrictions should be decided democratically and organized by democratic grassroots committees.

Universal unemployment and medical insurance are needed as part of the creation of a decent welfare system for all workers.