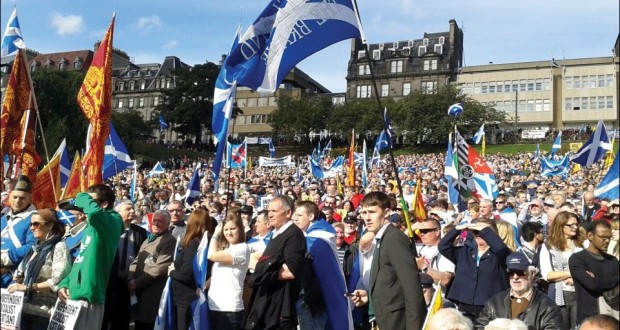 Thursday 18th September is referendum day in Scotland. Discussions are taking place in workplaces, colleges, schools and communities all across the country. The run-up to September will be dominated by debate on how to vote and what might an independent Scotland mean for jobs and living standards. Would it mean and end and even a reversal of the savage cuts that we’ve seen over the last few years ? Would working class people be better or worse off ? As a contribution to this debate Socialist Party Scotland has produced 10 questions and answers to explain our position on the referendum and the case for an end to cuts and the building of an independent socialist Scotland. 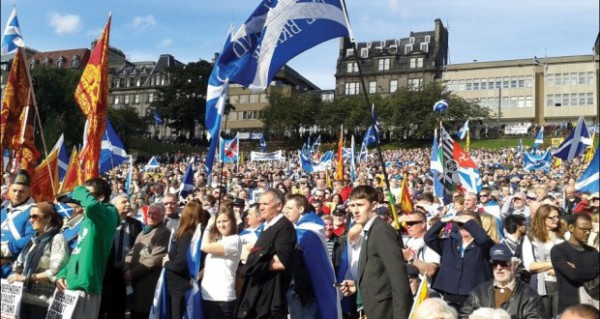 Why is Socialist Party Scotland supporting a Yes vote in the referendum?

Growing numbers of working class people – if we compare the situation to the 1970’s and 1980’s – are looking towards independence as an escape route from growing levels of poverty, cuts and falling incomes that face the majority of society. Since 1999 and the founding of the Scottish parliament we’ve stood for a parliament with full powers over the economy, tax, the minimum wage, benefits, pensions and defence etc.

But what about workers and young people who are aren’t convinced that independence under the SNP is the way forward?

We agree with this opinion. In truth, our support for a Yes vote is critical support – given the limitations of what is on offer from the Scottish government. In other words we are calling for a Yes vote while also explaining that the SNP’s model for independence would not change the lives of the majority of working class people in Scotland. Real change requires far-reaching socialist policies.

But isn’t the SNP promising a better, more prosperous Scotland after independence?

An independent Scotland under the SNP would certainly be more prosperous for big business. Under Salmond and co’s plans, the multi-national corporations would see their taxes cut. The SNP leadership are opposed to public ownership of the oil industry. They don’t even support the renationalisation of the profit hungry energy companies. They believe that capitalism – an economic system that is in its deepest crisis since the 1930’s – would be the bedrock on which a better Scotland would be built. This is ruled out in our view. Only through decisive socialist measures – democratic public ownership of the banks, oil and the major sectors of the economy – can we rebuild the economy in the interests of the working class as a whole.

What about the Nordic model. Isn’t that an example of a fairer capitalism that Scotland could follow ?

The Nordic model, which refers to the situation that emerged in Norway, Sweden, Denmark and Finland after 1945 during a period of economic boom, is no longer viable, at least for the capitalists. The high quality welfare state, low levels of poverty (but with high taxes levied on the working class) is being undermined – in the case of Sweden in a brutal way.

The end of the post-war boom from the late 1970’s on, which was reinforced by the world economic crisis in 2007/08, has led to an unravelling of the Nordic model, with privatisation and deep social cuts being implemented. There is no possibility under capitalism of an independent Scotland delivering decent living standards and an end to austerity cuts.

Wouldn’t anything be better than living under a brutal Tory government that we didn’t vote for ?

We agree that the powers of independence could be used to transform the lives of millions if they were used in the interests of the majority. However, it’s clear from the SNP’s white paper that they will not go down this road. Under Alex Salmond’s plan Scotland would form part of a currency union, with the Bank of England adjusting the straitjacket of what a Scottish government could spend on jobs and public services. The SNP want to join the big business dominated European Union that is being used as a battering ram to attack trade union rights and inflict savage austerity on the working class across the continent. The elite monarchy would remain as head of state under independence. Under the SNP’s proposals it’s not so much how things would change, its how much they would stay the same.

So what kind of independence do you want to see ?

We are campaigning for an independent socialist Scotland. We stand for:

To fight for these types of policies in an independent Scotland we need to build a new mass workers party, with the trade unions playing a leading role in this

Is it possible to build socialism in just one country ?

No. Capitalism is an international system of exploitation; the rule of an elite who own and control the means of production – the factories, the workplaces etc – and who employ workers to make profit for big business, not for social need. That’s why we are campaigning for an independent socialist Scotland to form part of a democratic confederation with a socialist England, Wales and Ireland as a step to a socialist Europe and beyond.

But won’t it just weaken the Yes campaign if you criticise the SNP’s policies?

If anything, the SNP’s emphasis on continuing with a pro big business agenda and refusing to pledge to end all cuts under independence is undermining support for a Yes vote. This is reinforced further by the experience of trade unionists and communities who face cuts by the SNP-led Scottish government and at a council level where they are in power. To win a Yes vote means convincing the majority of the working class that there would be major economic and social change under independence. This is not what the SNP are putting forward. The only answer to the smears of “Project Fear” and the so-called Better Together campaign is to put the case for a fundamental break from the onslaught of austerity supported by all the main parities. If the SNP leadership came out in favour of a 24-hour general strike of trade unions against the Con-Dem government, for public ownership of the economy and refused to carry out the cuts this would undoubtedly increase support for independence.

Isn’t there a danger that supporting a Yes vote can divide the working class?

The best way to insure this does not happen is for the trade unions to lead their own campaign for the referendum that emphasises the need for pro working class policies and opposition to all cuts. In other words a campaign that unites the interests of the vast majority of working class people – regardless of how they are voting in the referendum.

I agree with what you’ve said. How do I get involved?