The purge of lawmakers in Hong Kong has widened as chinaworker.info and many others warned could be the case. Four elected legislators including veteran left-wing pro-democracy campaigner ‘Long Hair’ Leung Kwok-hung of the League of Social Democrats are now facing the axe on the completely spurious charge that their oaths of allegiance were “improperly delivered”.

In addition to ‘Long Hair’ the other targeted politicians are Nathan Law Kwun-chung of youth party Demosisto, independent pan-democrat Edward Yiu Chung-yim, and Lau Siu-lai of Democracy Groundwork. All except Yiu (who represents a functional constituency) were elected in September’s LegCo (Legislative Council) elections in which the government suffered a humiliating setback.

The four are being dragged before the courts (the trial will take place on 15 December) in an undemocratic witch-hunt masterminded by Chief Executive ‘CY’ Leung Chun-ying. The courts have already shown, with the disqualification of two localist politicians last month, that they have become just another tool of the Chinese dictatorship for further limiting democratic rights in Hong Kong. The expulsion and subsequent capitulation of the two localists, from the shadowy group Youngspiration, which many suspect are pro-government provocateurs, has been used as a pretext for the current more serious attack.

CY is clearly using the purge, based on a bogus ‘legal’ interpretation by the Standing Committee of China’s unelected National People’s Congress (NPC), as part of a Machiavellian putsch to divide his opponents and cling to power for another five-year term. By attacking and weakening the position of the democratic opposition parties in the LegCo, CY hopes to win Beijing’s backing in the elite-only election process next March.

By escalating the political crisis that began with the exclusion of the two localists, CY hopes that Beijing will be forced to back him in the Chief Executive race rather than risk a damaging open split in the establishment camp occurring simultaneously with a major standoff against the pan-democratic opposition. He calculates that if the disqualifications are successful, some of the seats can be won by pro-Beijing politicians in subsequent by-elections, thus reversing the establishment’s setback in September’s elections. The government’s legal offensive is a “coup d’etat” against these election results said ‘Long Hair’. The law courts were the government’s instruments for carrying out the coup, he said.

A weaker pan-democratic bloc in the LegCo, which has an undemocratic built-in pro-Beijing majority, could make it easier for the government to control the LegCo and push through unpopular legislation. CY was already stated that his aim if re-elected is to reintroduce the anti-subversion law ‘Article 23’, stopped by mass protests in 2003, which represents a massive threat to democratic rights and freedom of speech in Hong Kong. 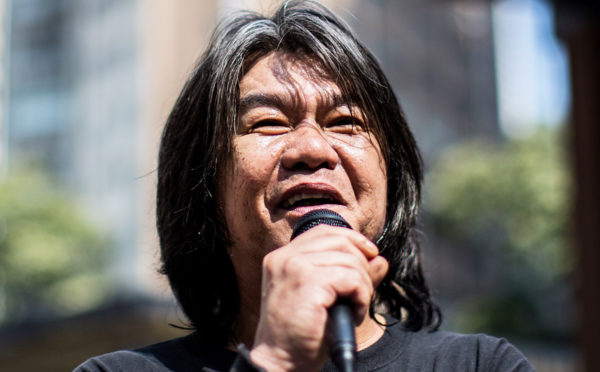 A clear sign that the purge is also a weapon in an elite-level power struggle was shown by the incident in the LegCo on 5 December, when Finance Secretary John Tsang Chun-wah refused to field questions from the four legislators targeted by the government’s lawsuit. Tsang claimed he was following the government’s legal advice by refusing to recognise the four, despite the fact they have not yet been found ‘guilty’ or removed by the courts. But after the incident, Tsang’s boss and possible rival in the upcoming Chief Executive elections, CY Leung, claimed it was done without his knowledge.

Many commentators don’t believe this explanation. Its seems quite likely that Tsang was set up by the CY camp. Tsang, who has presided over eight ultra neo-liberal budgets, is the most widely touted potential challenger from within the ruling establishment to run against CY in March.

There is an urgent need for an organised campaign of mass resistance against the purge and to defend basic democratic rights including the results of the September elections. Unfortunately, the traditional ‘moderate’ pan-democratic parties are keeping a low profile and only calling for relatively small and half-hearted protests against CY’s coup. The only way to successfully defeat the government would be to convene a ‘people’s parliament’ of all organisations that want to fight back, and for this to map out a fighting strategy of demonstrations, student strikes, mass boycott actions and other forms of collective civil disobedience.

The occupation movement of 2014 (Umbrella Movement) failed to win concessions not because it did not get enough support inside Hong Kong, but because it lacked any programme to spread the struggle beyond Hong Kong and because it focused solely on street occupations that cannot be sustained indefinitely and have no economic impact on the tycoons who run Hong Kong’s economy. Workers’ strikes and even student strikes – as recently brilliantly exemplified in Spain where a major victory has just been won against government attacks on education – are a much more effective political weapon.

By hesitating and refusing to reply with a bold call to fight back and mobilise, the pan-democratic leaders are inviting even greater attacks from the establishment side. Mass struggle and democratic organisation, with a programme linking democratic rights to the need to scrap corrupt capitalist rule, is the only way forward.