Speech brands China as foremost threat to US power

Mike Pence, Trump’s Vice President, is hardly regarded as an influential member of the US government. But his speech on 4 October to a right-wing US think tank marked a major escalation of the US-China conflict. The speech was a “scathing attack on Beijing” according to the Financial Times. It was significant because of “the magnitude of alleged offences piled up in one public indictment”, noted the New York Times.

In strident language, Pence took aim at China’s trade policies and “wholesale theft of American technology”, but also its “authoritarian expansion” and “new wave of persecution” against religious minorities including one million Uighur Muslims interned in prison camps. Solely to further its own imperialist agenda, the US government has suddenly discovered China is a dictatorship!

Pence accused Beijing of creating “an Orwellian system” of repression, failing to mention that US companies have supplied key technologies to China’s police state, or that the US – a “democratic state” – actually spends more on internal security than China.

The Vice President’s speech is seen by many as the declaration of a “new cold war” with chilling implications for global peace. Capitalist governments, led by the US, will want to pour even more money into military programmes at the expense of much-needed social spending. His remark that “what the Russians are doing pales in comparison to what China is doing across this country” served a dual purpose: to shift the focus, with elections looming in the US, away from the ‘Russiagate’ scandal, but also to clearly brand China as the foremost threat to US power. Pence repeated allegations made by Trump in his speech to the United Nations that the Chinese regime was meddling in the US elections. 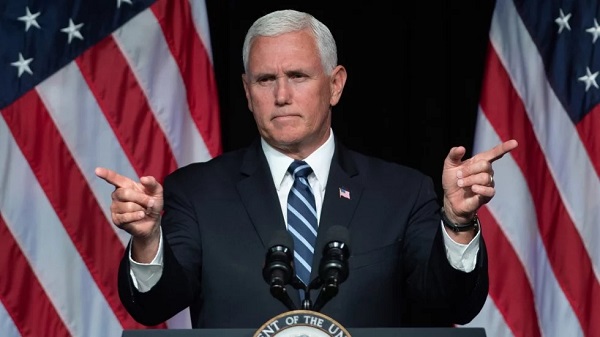 Pence’s speech was clearly timed to coincide with several new measures by Trump’s administration that escalate its multi-fronted conflict with China, which began over trade and investment issues, but has since spread to the military sphere. On September 21, the US imposed economic sanctions on Chinese officials following the purchase of Russian military jets and missiles. On September 30, a US naval destroyer in the South China Sea was involved in an “unsafe” encounter with a Chinese warship. A newly leaked report from the US Navy revealed plans to step up operations in these disputed waters as a warning to Beijing.

Today’s conflict is potentially more dangerous for global capitalism than the “cold war” between the US and Soviet Union in the past. China is a far more integral force in the global capitalist economy, meaning the economic fallout can be much greater. Trump’s government are playing with fire.

As we warned in an article on chinaworker.info in January 2017 (Trump and China: Heading for conflict?): “… capitalism is dragging humankind deeper into crisis and calamity. Our optimism in the face of these dark clouds is because we see the other side of these processes in the growing resistance of workers and young people around the world to capitalism and its political representatives… The necessary answer to Trump, to capitalism and right wing nationalism in all countries, is the building of a mass working class political alternative with a clear socialist programme.”