Hong Kong society under Chief Executive Carrie Lam Cheng Yuet-ngor is anything other than ‘stable’. The government’s slump in popular support deepens as corruption scandals, a worsening housing crisis, brutal inequality, and an endless stream of infrastructure ‘white elephants’ fill our daily lives.

A 60-page report from Oxfam, published in September shows economic inequality in Hong Kong is greater than at any time since records began 45 years ago. Hong Kong’s Gini coefficient, a measure of the wealth gap, is now at 0.539, compared to 0.458 in Singapore and 0.411 in the United States. Our city’s minimum wage will reportedly rise a measly three dollars to HK$37.50 per hour next May, but in South Korea, with much lower per capita GDP and a lower cost of living, the hourly minimum wage is HK$58.

The government’s political crackdown to quell the democracy movement, and now specifically to root out all manifestations of “Hong Kong independence”, escalates remorselessly. The expulsion from Hong Kong of Financial Times Asia news editor, Victor Mallet, whose family has lived in the city for seven years, establishes a new “red line” for government curbs on press freedom. Mallet is being punished for the “crime” of moderating at a meeting with pro-independence politician Andy Chan Ho-tin at the Foreign Correspondents’ Club (FCC) where Mallet is first vice president. Chan’s party – if such a thing ever existed – was the first party to be banned in Hong Kong, on September 24, a month after the FCC meeting.

If the aim of Mallet’s banishment was to shock the overseas capitalist establishment, governments and mainstream media, it’s a case of “mission accomplished” for the government. Rare protests have been heard from the US, Britain and the EU, heightening fears within Hong Kong’s capitalist elite that punishing foreign media representatives in such a brazen way could open a new front in the increasingly dangerous US-China trade war.

Such incidents could undermine Hong Kong’s attempts to insulate itself from the trade war by playing its “special status” card. That this is a real concern is illustrated by the recent visit by Secretary for Commerce Edward Yau Tang-wah to Washington to lobby for guarantees that Hong Kong would not be drawn into the US conflict with China. 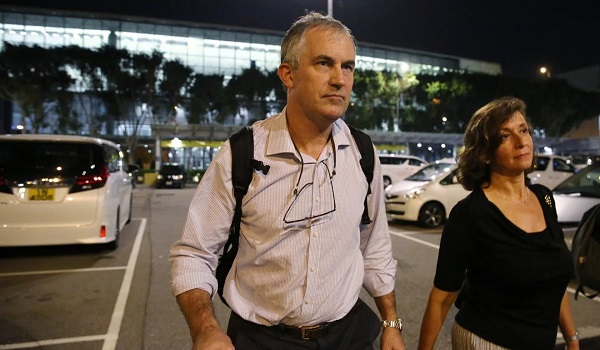 The Mallet affair has also stoked speculation of power struggles behind Lam’s throne – specifically that her former boss, CY Leung, and his factional allies in the Central Government Liaison Office are working to undermine Lam in order to pressure her into adopting even more sweeping authoritarian policies.

Several commentators have speculated that CY may be the real author of Mallet’s expulsion. Lam has tried to keep a low profile over the issue, but can hardly afford to show softness now the deed is done. Her target audience is not primarily the people of Hong Kong – who can’t and won’t vote for her government – but her boss Xi Jinping.

However, in the case of Mallet’s expulsion it is questionable whether this move – in the current international climate – is helpful to Xi. Beijing has “bigger fish to fry” in managing its strained relationships with Western governments. While the local Hong Kong office of China’s Ministry of Foreign Affairs declared it “firmly supports” the Mallet decision, stressing that visa cases “fall within a country’s sovereignty”, it can’t be discounted that this incident was contrived by factional forces on the Hong Kong side, acting independently of Beijing, and not necessarily serving its wider interests. Throughout four months of intensifying conflict with the US, Xi’s regime has shown considerable restraint and largely avoided inflammatory statements and acts (leaving this sort of thing to Trump).

Lam has come under fire on other issues such as her handling of the Typhoon Mangkhut aftermath – the biggest storm ever to hit Hong Kong. It seems that hardliners, with CY to the fore, are using every opportunity to embarrass her government in Beijing’s eyes as weak and ineffective. A major aim of this destabilisation campaign is to pressure Lam to speed up plans for introducing Article 23 anti-subversion legislation.

Beijing has made clear that Article 23 is close to the top of its Hong Kong agenda. Lam is more cautious, sensing her government’s lack of public support and knowing that the previous attempt to introduce Article 23 legislation fifteen years ago led to the disintegration of the Tung Chee-hwa’s administration. Her moves to ban the Hong Kong National Party of Andy Chan, using a former colonial law, can partly be seen as a delaying tactic to satisfy Beijing that Lam has enough existing legal tools to enforce Beijing’s repressive agenda without rushing headlong into a battle over Article 23, which runs the risk of a massive public backlash.

Top-level divisions and power struggles are not new in Hong Kong, especially in recent years, as competition has sharpened between rival capitalist cliques – traditional Hong Kong-based groups versus more recent mainland-allied players. But there is an added dimension today as the regime of Xi Jinping is more and more distracted by its economic and geostrategic standoff with Trump’s America, not to mention Xi’s domestic problems with a sharp economic slowdown and heightened social unrest.

In short, Xi’s regime is itself hardly ‘stable’ and that also goes for the international environment within which all parties are forced to operate. A complex web of factional infighting – part of China’s political tradition – increases the likelihood of sudden crises, policy miscalculations, and greater instability in Hong Kong, China and in their relations with the outside world. 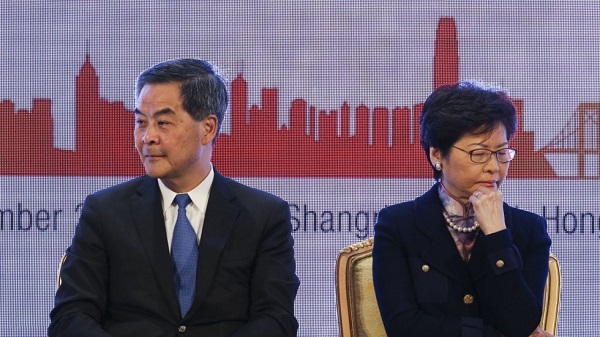 The increase in US interest rates, as its economy begins to grow again, has already had an impact on Hong Kong due to the currency peg, which forces it to follow changes in US monetary policy. The cost of home loans is going up, ending an unprecedented era in which global liquidity flooded into Hong Kong after the 2008 financial crisis, pushing house prices up by more than 140 percent since then.

“Hong Kong’s property market is having its worst combination of fundamentals in 15 years,” warned an analyst at CLSA, a mainland-owned investment company.

If Lam’s annual policy address in October was designed to shore up her support, this can only conceivably apply to one group – the billionaire class who are already the main recipients of government ‘welfare’ in the form of vast, largely unnecessary infrastructure spending.

The cornerstone of this policy address was the Chief Executive’s proposal to push ahead with the monster ‘East Lantau Metropolis’ plan, first mooted in 2014, to sink at least HK$500 billion into a gigantic land reclamation scheme in the waters around Lantau. This policy says everything about a government that can’t say no to the big property companies even when this further undermines its public support.

Lam’s proposal to build 1,700 hectares of artificial islands is much bigger than the 1,000 hectares envisaged in the 2014 plan. In April, the government set up a task force to undertake public consultations over Hong Kong’s land supply options. Now it is pushing ahead with the most expensive option without waiting for the report. Hong Kong’s housing crisis has never been about land shortage, as the government and property tycoons claim, but about the super-profits and financial speculation of these same tycoons.

“Pouring money into the sea,” is how many see the Lantau project, with the government conspicuously ignoring cheaper more readily available options such as building upon the 170 hectare Fanling golf course (which charges an annual membership fee of HK$340,000 while paying just HK$1,000 per year in rent to the government). This option could provide 115,000 residential units.

Based on its track record of routinely overshooting budget estimates for infrastructure projects, many experts dismiss the government’s “rumoured” price tag of HK$500 billion for Lam’s Lantau madness, and predict the real cost could be as much as HK$1.2 trillion, almost equivalent to the government’s entire fiscal reserves.

This is 14 times more than the cost of the Hong Kong-Guangzhou high-speed railway, for example, itself a monumental folly. Furthermore, it dwarfs the cost of establishing a universal pension system, priced at around HK$50 billion, which the government says it can’t afford!

Lam’s plan syncs with Xi Jinping’s now deeply troubled Belt and Road Initiative (BRI). The government’s main aim is to realise the ‘Greater Bay Area’ plan (Guangdong-Hong Kong-Macau), to integrate Hong Kong with China’s economy. The Lantau development is pivotal to this plan, which would also include new rail links, tunnels and a new bridge connecting Hong Kong Island and Kowloon to Lantau.

The government is trying to sugar this pill with wholly misleading claims that the artificial islands could be used to “solve” the housing crisis – creating land for up to 400,000 residential units to house 1.1 million people. 70 percent of these units will be reserved for public housing, Lam says. But what she actually means is subsidised saleable apartments, which are 10-20 percent more expensive than ‘Home Ownership Scheme’ (HOS) apartments, plus HOS units, so that the proportion of real i.e. rented public housing would be significantly lower than 70 percent.

Lam’s ever-increasing authoritarianism and neoliberalism will not abate by itself. Her rule has profited from an absence of serious organised opposition due to the total political disarray in the pan-democratic camp. A mass fight back needs to be built, and this requires re-tooling the democracy movement with a new, combative leadership, and a working class anti-capitalist political party as its main force. 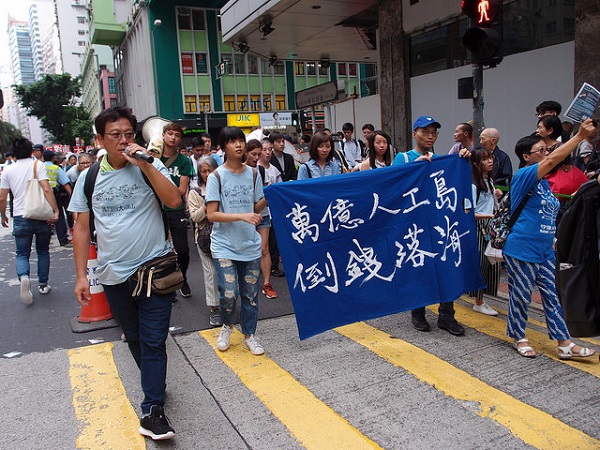