Their struggle is not just about (lack of) money. Even beyond the legally codified low wages for this group of workers known here as “domestic helpers”, there are other aspects of their employment that facilitate their super-exploitation: 1) the legal requirement that they live at the home of their employers, leading to excessive work hours and lack of privacy; 2) the law requiring them to leave Hong Kong within two weeks of any termination, hardly sufficient time to find a new contract; and 3) the various fees and schemes – often illegal – of the recruitment agencies to which the Hong Kong government turns a blind eye. 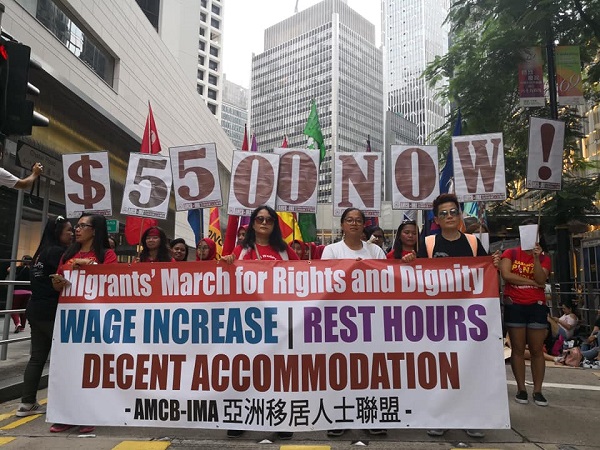 The so-called recruitment agencies illegally overcharge and force migrants into heavy debts. These agencies are very poorly regulated by the government and punishments for violations – when they do rarely occur – are very soft.

According to a report from migrant activist groups MFMW and APMM compiled after interviews with more than 1,000 Filipino domestic workers last year, rocketing charges from recruitment agencies mean these workers are now spending over a third of their monthly wages to pay back loans and fees, more than double the amount five years ago.

Coupled with the higher cost of living in the city, this means domestic workers had less for remittances and savings than before – an average of HK$1,700 a month in 2017, or 32 percent of their income, down from 54 percent five years ago.

The “live-in” rule for migrant domestic workers reinforces their exploitation by obliging them to work under conditions of virtual slavery, in may cases working late into the night preparing meals for the next day, sleeping on mats in hallways, even storerooms, (43 percent of migrant domestic workers do not have their own room), and then being the first to wake up and start to clean (sometimes including other family residences or office spaces off-site), wash cars in the buildings’ garages, take children to and from school, care for elderly or infirm, shop, do laundry and more. Clearly, the Hong Kong government’s insistence upon the live-in rule represents a form of social control over migrants – to limit their social interaction and personal freedom.

“An injury to one”

The two-week grace period is an obvious means for weakening the bargaining power of migrant women workers in the face of employers who have every right to dismiss them at will, after which the clock starts and the police become enforcers.

There is also a not-so-subtle manipulation in the debate on the rights of migrant domestic workers in the use of the term “domestic helpers” – as though these workers are just “lending a helping hand” or are somehow like an au pair, which Wikipedia defines as a domestic assistant from a foreign country working for, and living as part of, a host family.

Creating a separate category linguistically as well as legally, is part of the condescending and intrinsically racist attitude towards these workers exhibited by many employers and encouraged by the Hong Kong government. Admittedly, “helper” sounds much better than “virtual slave”, though the latter is clearly a closer description of the treatment of these workers.

Organisation is clearly key to achieving change for migrant workers, starting with self-organisation of migrant workers, but also bringing about change within the broader labour movement. Migrants account for around 10 percent of the Hong Kong labour force. The need to build fighting trade unions that link up with other sections of the working class and understand that eternal maxim of working people, “an injury to one is an injury to all”, has never been clearer. 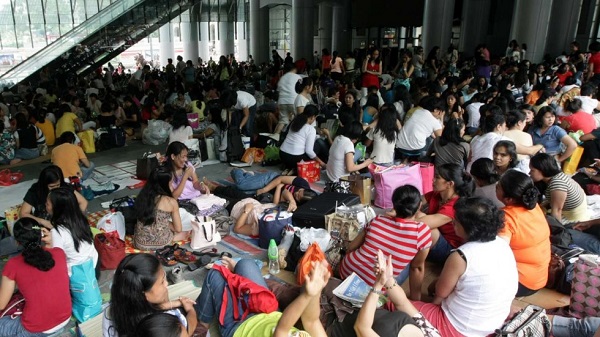 The Hong Kong government likes to think of the Special Administrative Region as a grand success story of economic development and further as a beacon of Western values as epitomised in the oft repeated touting of “rule of law” and the “free market”. It’s true that the skyline and shopping malls are impressive sights and Hong Kong’s historic role as a gateway to China is undeniable. But what really lies at the base of its “success story”?

At very least in part, it’s the millions of under-paid and unpaid hours of labour each year by the nearly 400,000 women, mostly from the Philippines and Indonesia, who work long hours under difficult conditions to keep things running for hundreds of thousands of Hong Kong’s homes.

This army of cheap labour allows the government to shirk its responsibility to fund vital public services like childcare and especially elderly care. Hong Kong is so lacking in care homes for the elderly that around 6,000 old people die each year in the queue to be admitted to a care home. Boasting more “ultra-rich” (owning at least US$30 million) than any other city in the world, Hong Kong’s government spends less on social services as a share of its economic output (GDP) than any other developed economy. Super-exploited migrant workers are used to fill this gaping services vacuum.

Another aspect, which Hong Kong can rightfully be proud of, is its relatively high level of female participation in the workforce, which has grown from 47 percent in 1990 to 54 percent in 2017. But again this rests mainly on the backs of migrant women workers who take on the job of maintaining households that has historically so overwhelmingly fallen on local women.

Hong Kong capitalism and its unelected government have no plans to dismantle this two-tier social construct. According to the South China Morning Post (5 November, 2017) the government’s labour chief stated that Hong Kong will need 600,000 domestic workers in the next 30 years (an additional 240,000 by their reckoning) amid increased demand for elderly care.