The Battle is Just Beginning.

This article was written in October.

The Chilean people gave another example of consciousness and strength this Sunday 25 October. The Constitution inherited from Pinochet’s dictatorship was rejected by 78% of voters in the plebiscite that turned out 7.5 million people, the highest electoral participation in the history of the country. 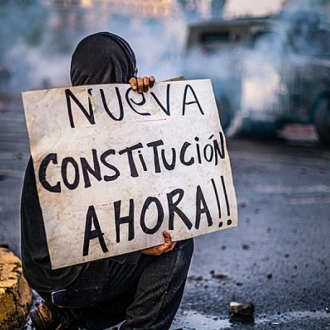 The approved proposal also means the adoption of gender parity in this new constituent body to be elected in April 2021, which represents an important and unprecedented achievement.

The plebiscite represented a major step forward in the struggle to bury the remnants of Pinochet’s murderous dictatorship, which combined neoliberalism and state terrorism and has largely survived the 30 years of a limited and unpopular “democracy” since the military dictatorship came to an end in 1990.

This result is not only a defeat for the ‘pinochetista’ right wing. It is also a slap in the face for all the so-called ’democratic’ politicians who, even after the end of the dictatorship, refused to promote effective changes in the political, economic and social system in the country.

The enormous social inequality and the lack of basic rights, such as access to education, health and retirement, ended up provoking a powerful social explosion, detonated by the increase in the rates of the Santiago subway. Since then, the Chilean people have courageously taken to the streets with a tremendous determination to fight.

Sunday’s conquest was the result of the massive, tireless, heroic and radical struggle of the youth, women, the Mapuche people and the entire Chilean working class.

The mass uprising showed the strength of the working class and all the oppressed. It faced the savage, cowardly and murderous repression of the Carabineros (Chilean military police) and the arrest of thousands of activists. It succeeded in knocking back the government and the ruling class in Chile.

The Battle is Just Beginning

But the battle is just beginning. The ballot box is no substitute for real struggle in the streets, workplaces and neighborhoods. Mass mobilization must continue for the end of state repression, for the release of the more than two thousand political prisoners, and for the punishment of those responsible for the deaths, injuries and other consequences of the repression.

As the person directly responsible for the cowardly repression, Piñera has to go down now. It cannot be accepted that there would be a truly democratic constituent process under such an authoritarian and anti-popular government.

The struggle must also continue against the maneuvers and traps created to muzzle and contain the will of the people in the constituent process. This is the case with the two thirds requirement for the approval of measures in the new Constituent Convention, which could offer the right-wing and conservative sectors a veto over the most advanced proposals.

At this time, it is necessary to deepen grassroots organization through Popular Assemblies in neighborhoods, schools and workplaces, to discuss the type of new Constitution needed and how it should represent a real break with the current political and economic system in Chile. Let the popular representatives to be elected in April be the result of this grassroots organization, debate and mobilization.

We cannot accept anything less than a Constitution that guarantees public education, health and retirement for all Chileans. One that guarantees the rights of women and indigenous peoples. One that offers conditions for the defense of the environment. One that puts natural resources and key sectors of the economy under workers’ control. Let the super-rich pay for the crisis and guarantee jobs, wages and democracy for the workers.