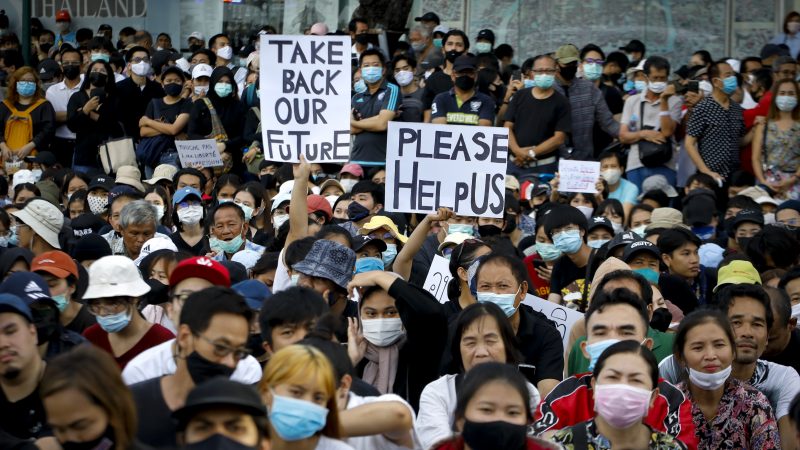 Regardless of subsequent developments, mass demonstrations in Thailand have forever changed the country’s political landscape. At the time of writing, Thailand has undergone months of magnificent protests. The government implemented extensive repression and censorship. Not only were voices criticizing the government  banned, but it was also made illegal to broadcast live demonstrations or to post images or videos of the demonstrations on the Internet.

The regime even cut off some international satellite news media to block the news. At the same time, it granted high-level powers to the military police for suppression, allowed them to arrest and hold the protesters directly without prosecution, failed to guarantee arrested people’s right to contact a lawyer or meet with family members, and exempted the executive from legal responsibility from the consequences of these actions. Until November, the masses were still dealing with the military and police on the streets, as the anti-authoritarian movement in Hong Kong for a long period of time. Similarly, like the Hong Kong movement, the Thai people put forward their three major demands: dissolving the parliament, stopping oppression of the people, and enacting a new constitution. According to a poll conducted in August, 54%, 59% and 63% of the people support the three demands respectively.

Also at the time of writing, the protest movement in Thailand is continuing. The government tried a knock-out blow with an increase in the level of armed suppression, tried to disperse the masses through violence and prohibitions, combined with false concessions to divide and ease popular anger. At the same time, on November 18th, the Thai National Assembly rejected the draft amendment submitted by the entire constitutional amendment committee. The draft amendment itself only proposed a small or even symbolic restriction on the power of the King of Thailand. This means that the current government of the Thai military junta and the Thai king are determined to resist the demands of the protesters. 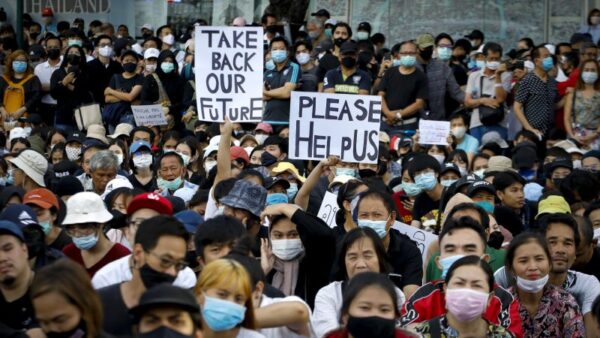 At the same time, the ruling party also began to mobilize the Thai king to send counter-demonstrators onto the streets. Of course, the number and momentum are virtually insignificant compared to the opposition camp.
Since February, Thai students have been holding demonstrations on their campuses. In July, after the people were violently suppressed by the police for protesting the Thai government’s ineffective handling of the epidemic, mass protests detonated. The Thai government repeatedly issued bans and tried to suppress them by force, but the masses still ignored the bans and the suppression and took to the streets.

In August, more than 100,000 people demonstrated in Bangkok. Demonstrations broke out in more than 20 provinces across Thailand from south to north, including Chiang Mai, Ubon Ratchathani, Chonburi, and Nakhon Ratchasima. September 19 was the anniversary of the 2006 military coup that overthrew the government. 100,000 people flooded the streets of Bangkok. October 14 marked the 74th anniversary of the mass uprising against the military dictatorship in the 1970s, and a similar number of people gathered again. The demonstrators once besieged the king’s motorcade, shouting “Repay my taxes!” and raised three-finger gestures to the royal family members in the motorcade.

Middle school students have been the backbone of the movement in Thailand, and young women play an important role in the movement. The students raised three fingers in protest at their schools’ opening ceremonies. Middle school students even launched a protest at the Ministry of Education. When the Minister of Education tried to appease the students, he was denounced as “the stooge of a dictator.” Unlike the previous generation who experienced brutal repression, the new generation does not feel this fear, just as the radicalized left-wing youth in China have also lost some of their fear about the repression of June 4th 1989. Activists for LGBT equality and abortion rights also joined the protests, and also present were groups fighting for the right to self-determination in the southern three provinces (Pantani) of the Muslim Malay region.

All three demands directly challenge the authority of the royal family. This is the first time in decades that the mass movement has had the confidence to criticize the royal family publicly. But at the same time, it has not completely escaped the limitations of the capitalist power structure of the monarchy and the current undemocratic military government. Some demonstrators still said that if the government and the royal family are willing to make concessions, they are still willing to “support” the continued existence of the Thai royal family. Some of the more progressive youth advocate a republic for Thailand.

The working class in Thailand did not participate in this movement with its own independent identity and program, but only as supporters of student groups and as part of protesters in the streets. As the labor movement has been frustrated in its historical development, the situation has become complicated, which means that the opposition movement has not used the most powerful weapon against the regime, labor strikes, and the working class is the core of the organization of the new society. Due to the fact that the movement has not yet been upgraded to a higher level of struggle, coupled with the authorities’ unyielding stance, and armed suppression by the military and police, the struggle has entered a stalemate in December. It is still unknown how long the current situation will continue before the movement reaches its peak.

The struggle’s major impetus is that since 2014, Thailand has entered a period of military dictatorship and stopped all democratic elections. Last year, Thailand reopened the parliamentary elections after five years of military dictatorship. However, the results of the elections aroused fierce controversy. The former coup leader Prayut was put in power through election fraud. Just over a year after its establishment, the new party “Future Kadima”, which participated in the general election for the first time, won 6.27 million votes, or 18% of the vote, and won 81 of the 500 seats in the National Assembly, making it the third largest party in one fell swoop.

Like the new parties that have emerged in various countries in recent years, the Future Kadima Party quickly attracted a large number of support with its anti-establishment and youthful appearance. Unlike the Thaksin Group’s “For Thai Party” and “Thai Rak Thai Party”, which have distinct urban and rural support, the Kadima Party succeeded in breaking through to earn the votes of conservatives in many urban areas in the past. In particular, small bourgeois self-employed individuals who used to be well-off, due to Thailand’s economic downturn in recent years, this year, even more hit by the epidemic, were completely disappointed with the royal family and turned to support the Kadima in large numbers. When the government banned the Kadima in the future, it became a fuse for youth demonstrations.

The political situation in Thailand often gives people the impression that military coups are on the verge of proliferation. In fact, there have been 17 military coups in Thailand from 1947 to 2014. The Thai royal family has directly or indirectly participated in the previous coups, mostly to overthrow the civil government that threatens the interests of the royal family or the military. In recent years, the most well-known is naturally against the Thaksin family and political groups in the 2006 and 2014 coups. Obviously, the Thai army and the royal family have a fairly solid bond of common interest, but the real power relationship lies in the connection between the military and its huge capital.

The Thai royal family itself leads an extremely luxurious and decadent lifestyle. It has amassed wealth of up to US$43 billion. It is the richest royal family in the world. In contrast, the British royal family has only US$520 million. The Saudi royal family is only US$18 billion, which is still less than half of the Thai royal family. At the same time, the corruption of the Thai army is equally appalling. The Thai Army is one of the world’s largest human trafficking groups and sexual service business groups. According to the “Human Trafficking Report” published by the US State Department in 2014, Thailand is the most rampant country in the world for human trafficking. The report shows that an adult in Thailand can be trafficked for about US$2,000, and the traffickers earn US$320. The rest is taken away by the Royal Thai Navy and Coast Guard.

Since the succession of the current king of Thailand, Wajiralongkorn, his absurd private life and political incompetence have caused the royal authority to plummet. Especially after the outbreak of Covid-19 in 2020, Vajiralongkorn  fled to Munich, Germany with twenty concubines, leaving national affairs behind. This news has completely shaken the status of the royal family and further aroused the anger of the Thai people.

The consciousness of the masses has undergone tremendous changes, and it is now necessary to further propose a clear class-orientated program. In particular, Thailand’s major cities have experienced economic depression under the impact of the epidemic, a large number of domestic small and medium-sized enterprises have gone bankrupt, and the masses have lost their jobs. Even domestic industrial workers are facing a crisis of declining salaries, living conditions and large-scale layoffs. These problems cannot be solved by the Thaksin Group, the 2nd generation telecommunications tycoon, Tanathon, or any other party. The capitalist elite will not solve it either.

The left-wing forces in Thailand used to have considerable influence in the 1950s and 1970s, and were subsequently brutally suppressed by the Thai royal family and the army with the active support of US imperialism. The working people in Thailand should now seize this opportunity to rebuild. The political forces of the left-wing trade unions and the working class, while promoting the struggle for democratic rights and presenting the economic demands of the working class, can win a victory against the autocratic establishment and ensure that victorious results will not be usurped by domestic big business and big capital.

In fact, since the revolution overthrew Thailand’s absolute monarchy in 1932, the royal family has become a tool to serve the will of the military and capitalists, while its own independent power is actually very weak. Of course, it is fair and reasonable to criticize the royal family’s privileges, but what the masses really want to challenge is the capitalist system behind the military, big business and the royal family. This youthful uprising requires an organized democratic structure and a connection with working people. This also means overcoming the skepticism of political parties and working with the workers to build a new struggle-based left-wing party to change society.