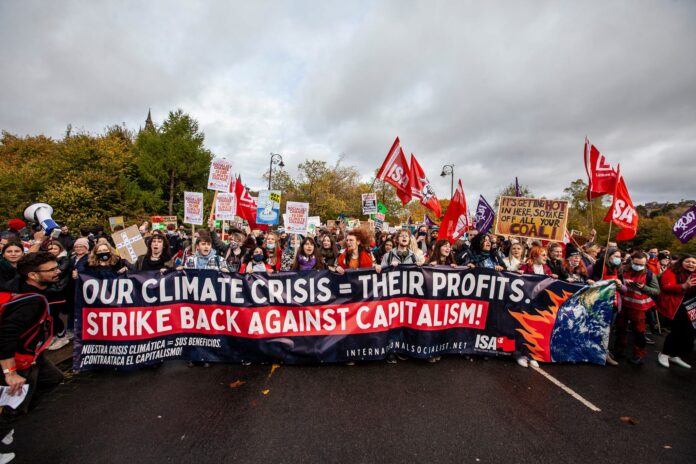 ‘Monumental failure’, ‘Empty words, no action’ and ’Utter betrayal’ are just some of the words used to describe the outcome of COP26. To save the climate capitalism needs to be ended. ISA was in Glasgow to build an organisation capable of organising a change to a socialist world.

World leaders have been gathering in Glasgow these past two weeks for the COP26 UN Climate Change Conference in order to give the global capitalist system a fresh coat of green paint. What was always going to be a farce turned out to be even more underwhelming than might have been expected. Working people and youth around the world are facing rising temperatures, natural disasters, and the likelihood of more pandemics. The conference answered that with Joe Biden and Boris Johnson falling asleep during the opening remarks; Bolsonaro, Putin, and Xi Jinping choosing not to attend; and a collection of hollow promises that still add up to a catastrophic 2.7C of global heating by 2100. 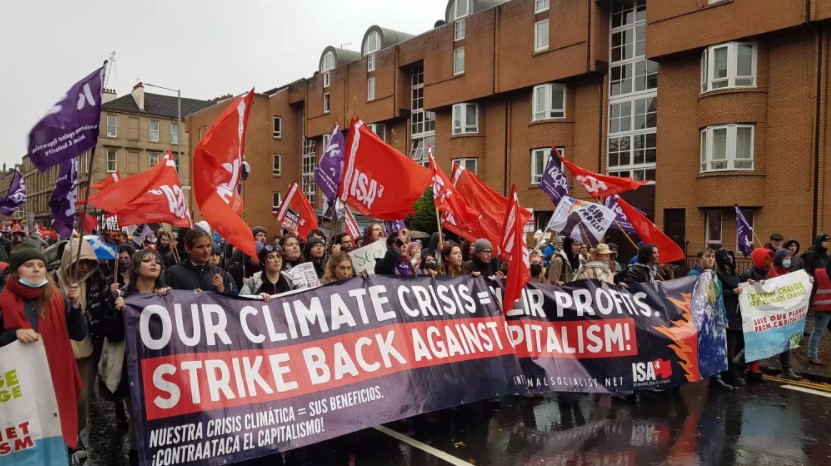 The only actual positive outcome of COP26 was not found in the meeting halls alongside figures like Biden and Johnson, but out on the streets where we saw the beginnings of a revival of the climate movement that swept the world in 2019. Demonstrations calling for real, substantial action to confront climate change brought 100,000 people onto the streets of Glasgow last Friday and Saturday!

International Socialist Alternative understands the enormous importance and revolutionary potential of this movement which is why we mobilized 300 of our members and supporters from around the world to build an international socialist contingent at the protests. Revolutionary socialists from our national sections on all continents, including Brazil, the United States, China/Hong Kong/Taiwan, Belgium, Ireland, and more gathered together with over 100 members and supporters of Socialist Alternative (ISA in Scotland, England & Wales) to ensure that a class struggle-based, internationalist voice was heard loudly on the protests, pointing to the need for socialist change to put an end to climate change. 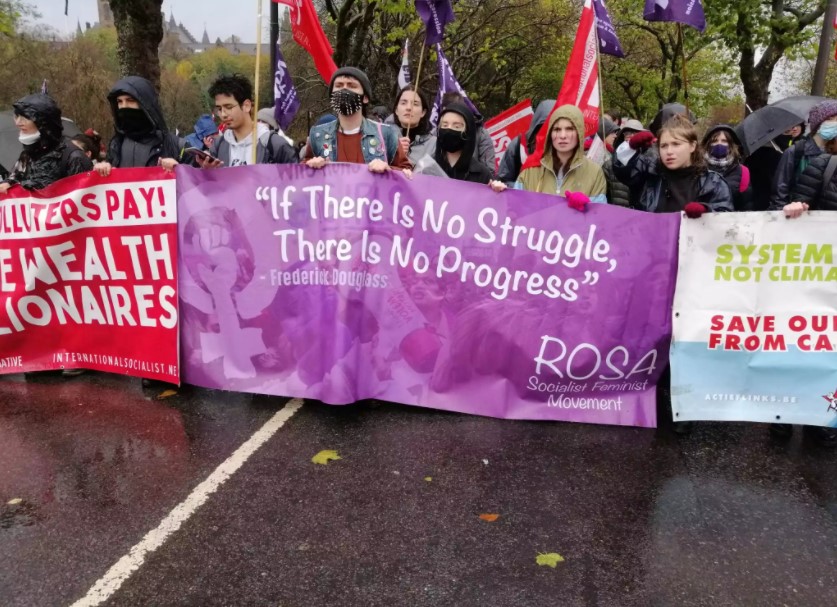 Why was the conference such a failure?

This is not the first or the last time we will see politicians and business leaders coming together for this kind of “greenwashing festival.” The Paris Climate Agreement was adopted at COP21 in 2015 and sold as a major step forward in the efforts to limit global temperature rises. Five conferences later and the situation has only worsened. This year’s IPCC report, which laid out the harsh realities of climate research, has been described as a “code red for humanity.” Even with that damning prognosis, it would be incorrect to expect substantial action to be agreed upon in the conference.

Billionaires and their politicians will never be able to sufficiently address the crisis that is stemming from the drive for profit at the heart of their system. When only 100 companies are responsible for 71% of all industrial carbon emissions it is clear that the interests of the super rich are fundamentally opposed to the aims of the climate movement. All efforts with the potential to lead to real progress against climate change pose a threat to the stability of the system that keeps these figures in power. Any truly positive result coming out of COP26 was doomed from the start.

Socialists on the streets

Millions of workers and youth around the world know that they can no longer place the trust of our planet’s future in backroom deals of businessmen and politicians — that was clear from the fierce energy on the streets of Scotland. Tens of thousands gathered for the Fridays for Future school strikes demonstration, a continuation of the 2019 movement on an even bolder stage. Even more mobilized again on Saturday in a massive march featuring a wide range of blocs and banners from various social and environmental movements including many trade unions. Even heavy rain couldn’t stop workers and youth from putting demands for climate action forward.

International Socialist Alternative identified COP26 as a key moment for the global climate movement. That’s why we gathered our members from all corners of the world to Scotland to make it explicitly clear who is responsible for this crisis: the CEOs and billionaires of the world. We called for massive public investment in a socialist green new deal to create tens of millions of quality jobs worldwide, seizing the wealth of the billionaires to fund climate friendly policies and the bringing of polluting multinationals into democratic public ownership to implement a sustainable socialist economic plan which reorganises the economy to serve people and the planet first — these are only a few of the demands that the movement must enthusiastically take up!

Internationalism is totally fundamental to tackling the interlinked enemies of climate change and capitalism, which is why we had ISA members from Glasgow to Brazil assembled to form the widest possible contingent of workers and youth from around the world at the demonstrations. The 300 of our members who attended were joined on the marches by hundreds more who were inspired by our vibrancy and the message we were putting forward. We sold over 1,000 copies of our paper and are rapidly signing up enthusiastic members and supporters in Glasgow, Edinburgh and beyond.

ISA even had a speaker on the main stage at the rally following the Fridays for Future march. Amy Ferguson, a Unite trade unionist and member of the Socialist Party (ISA in Ireland), spoke shortly before Greta Thunberg. She emphasized the might of the working class and the necessary role that we will have in forging a better world. Amy concluded her speech with a quote from Scottish-born Irish socialist James Connolly who said:

“For our demands most moderate are, we only want the Earth.” – James Connolly

Not only did we seize the moment to enthusiastically join the demonstrations in Glasgow over the weekend, but we even assembled our own march through Edinburgh on Friday for school strikers unable to make the trip to Glasgow with over 100 people attending. The march concluded with an open mic where we heard from a mix of ISA members, students, and workers from Edinburgh. 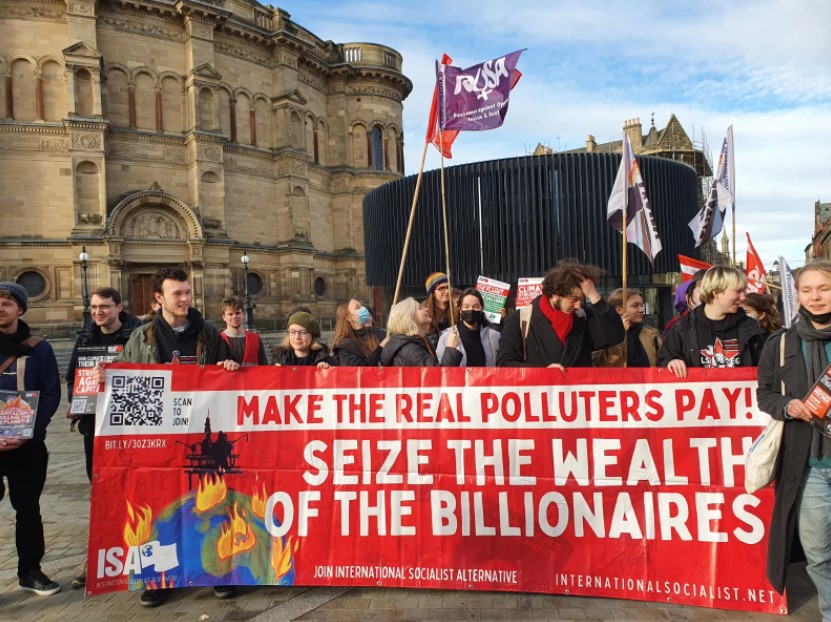 The enthusiasm we received was reflected in the attendance for our public rally after the march on Saturday which was titled, “Capitalism is Killing the Planet: Fight for International Socialism,” which was attended by over 350 people. Speakers included Scottish trade unionist Caitlin Lee, socialist TD in the Irish Parliament Mick Barry, a member of the Solidarity Against Repression in Hong Kong and China campaign, and climate activists from Brazil and South Africa. This energizing rally pointed at all times to the power that working people have in the fight for climate justice and the need for a unifying socialist programme to unite the struggles against the world’s most pressing problems. 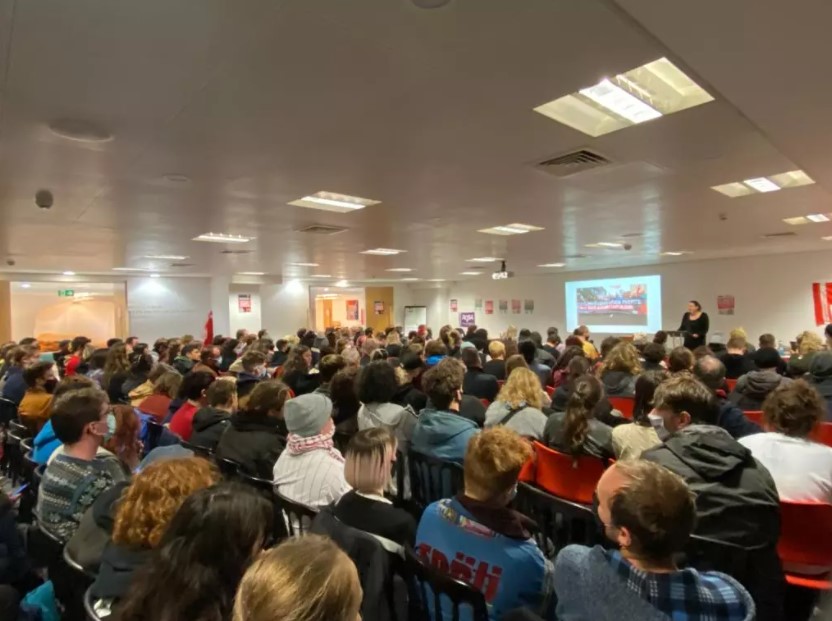 The next steps for the climate movement

The power of the working class grows from its role in society. If the drive for profit plays such a pivotal role in climate change then those workers who create all of that profit and have the power at any time to stop it represent the key force in winning real change. Greta Thunberg indicated exactly what direction the climate movement needs to go when she called on striking transportation and bin workers in Scotland to join the COP26 demonstrations. The school strike movement should be met with active solidarity by trade unions and expanded out into economic strikes in our workplaces, coordinated nationally and internationally. We can force substantial concessions by hitting the bosses where it hurts — their profits — while at the same time showing that the working class can change society fundamentally if it is organised and conscious of its power. 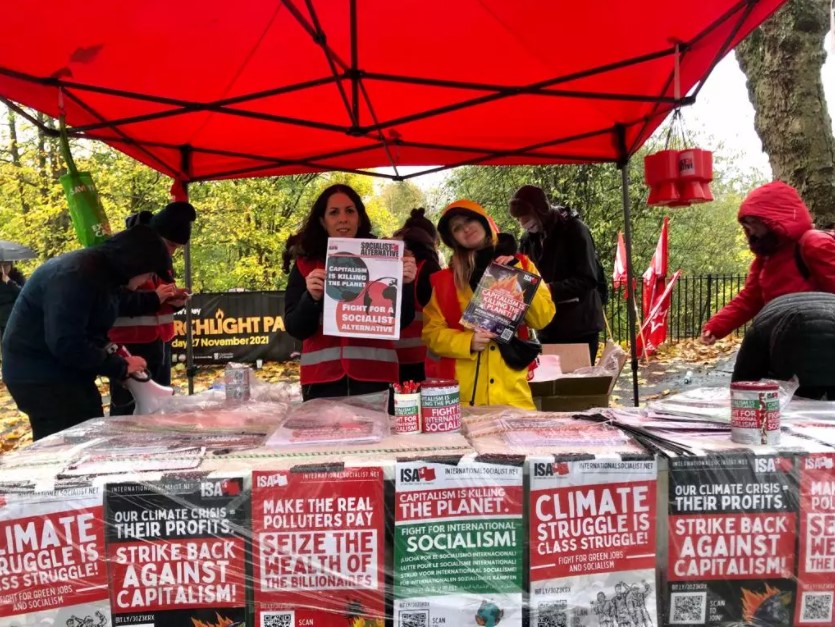 Rank-and-file trade unionists should play an important role in building towards this through the formation of climate committees in workplaces and unions. These committees would be used to organize efforts linking the struggle for a safer and cleaner future to the interests of working people. This should include increased funding for green union jobs through taxing the rich and the retraining of fossil fuel workers to the renewables industry at no loss of pay.

Capitalism is killing the planet: Fight for International Socialism! 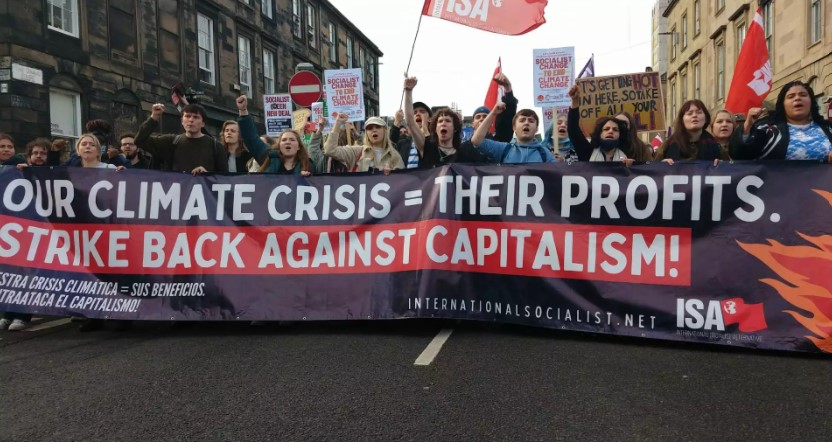 The climate crisis is the single greatest threat that humanity has ever faced and rising to the occasion will require a complete restructuring of our society along socialist lines. Carbon emissions, deforestation, and the stripping of natural resources are fundamental to the continuation of capitalist production. Working people need to get organised and build independent political parties in order to take the steps necessary to put an end to this polluting system and carry battles forward through democratic mass structures.

To achieve the revolutionary change our planet needs, we need to build a mass revolutionary organization of working people and youth dedicated to the struggle for international socialism. We are proud to be building a fierce and dynamic international organization committed to this struggle, active in over 30 countries on all continents and growing. As we chanted from Kelvingrove Park to Glasgow Green to all corners of the globe — “Our movement is unstoppable — a socialist world is possible!”

“COP26 was an occasion like none I’ve ever experienced. As I joined ISA during Covid, it was my first chance to experience an international mobilisation. In the days and weeks leading up to it, nerves had set in a bit and at times I even asked myself if I should go, worrying if my attendance would even have any real impact.

But by the end of the weekend, my voice had left me after hours of chanting and interesting conversations with other members. It’s one thing to do what we do, theorizing and discussing in detail situations of class unity and class struggle. It’s a different thing to be amongst it, to feel so united with the people standing around you and to be a part of something that feels much bigger than you. In the everyday, seeing what seems like such little progress at times can be disheartening, but being there helped me to understand that these are the situations where real change comes from, in realising the power that we all have together in standing united for a common goal.

For me, attending COP was an antidote to hopelessness, something so invigorating I find it hard to describe. Coming away from it, I feel more focused, optimistic for the future and understand better the change that is possible and where that change will come from.”

Be a part of the fightback against climate change, oppression, and capitalism — join ISA today!