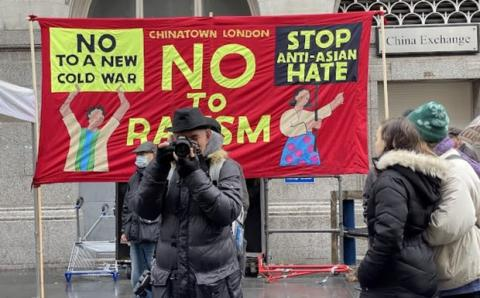 Solidarity Against Repression in China and Hong Kong

Two groups of protesters, one involving mainland Chinese organisations, the other young Hong Kong emigres, clashed in London’s Chinatown at the end of November. This incident is a warning of the dangers of nationalism and racism aggravated by the new Cold War between Western and Chinese imperialism and Xi Jinping’s brutal crackdown in Hong Kong. The London events show how this geopolitical struggle is inserting itself into and magnifying ethnic and political conflicts.

Another recent example of this process is on the opposite side of the world, with the burning and pillaging of Chinatown in Honiara, the capital of the Solomon Islands. Years of ethnic conflict in this impoverished former British colony have been compounded by power struggles involving the Chinese state and capitalists on one side and the US and Taiwan on the other side.

No to a new Cold War

In London’s Gerrard Street on 27 November an ostensibly anti-racist rally was held under the slogans ‘Stop anti-Asian hate’ and ‘No to a new Cold War’. These slogans are laudable. Unfortunately, the political composition and character of the demonstration, involving a long list of front organisations connected to the Chinese dictatorship (CCP) told a very different story. The demonstration was jointly hosted with a number of UK-based NGOs and ‘left’ campaign organisations. Among the speakers were Fiona Edwards of the Stop the War Coalition and Kate Hudson of the Campaign for Nuclear Disarmament. Another speaker was a member of the Conservative Party. It has been reported that Labour’s John McDonnell was booked to speak at the demo, but pulled out after lobbying by pro-Hong Kong groups pointing to the involvement of CCP-linked organisations among the rally organisers. These organisations echo the propaganda of the Chinese dictatorship and support its repression in Hong Kong and Xinjiang.

In fact, it was these organisations that dominated the London demonstration. In Chinese, the message was very different from that in English. The representatives from UK groups seem to have been under the impression that their pacifistic and non-political anti-racism was the theme. But the Chinese regime through its front organisations and supporters hi-jacked this event, turning it into a glorification of the CCP’s policies in Hong Kong and Xinjiang and conflating any criticism of the dictatorship with “anti-Asian hate”. The CCP uses a similar method to the Israeli state, whereby all criticism of Israel’s actions is equated with “anti-Semitism”. Likewise, all criticism of the Chinese regime is branded “anti-China” and “offensive to 1.4 billion Chinese people”.

Both this demonstration and the counter protest by a group of Hong Kong activists, mostly from the nativist layer (right-wing Hong Kong nationalists), were small, fortunately. Around 100 people participated in the pro-CCP demonstration and fewer than 50 in the Hong Kong counter demonstration. But the subsequent clash with racist insults being hurled by participants on both sides, culminating in a violent confrontation and several injuries, has become a much bigger affair on social media and in the Chinese language press.

Former Hong Kong lawmaker Nathan Law, now living in exile in the UK, called upon the British police to investigate the organisers of the “anti-racist” rally. From the opposite camp, an anonymous bounty of £10,000 was offered on Chinese social media platform WeChat to anyone who could provide the London addresses of Law and another exiled Hong Kong activist, Simon Cheng. Other posts have discussed building “a team” to attack “pro-Hong Kong independence activists” living in the UK. British police have since announced an investigation into the threats against Law and Cheng. For the record, Law and Cheng are liberal politicians allied with the British and US capitalist establishments, but do not advocate Hong Kong independence. The CCP brands all who campaign for democratic rights in Hong Kong as “pro-independence”.

As in other western countries, the UK has seen a spike in anti-Asian racism especially since the onset of the pandemic. This has been fuelled by right-wing politicians and media seeking to scapegoat Asian and Chinese people for capitalism’s disastrous inability to manage an effective pandemic response. The Cold War rhetoric against China from governments like Boris Johnson’s have undoubtedly further whipped up anti-Chinese and anti-Asian sentiment among some sections of the population. To counter this, real anti-racist struggle is needed, but this needs to be completely independent of government manipulation, unmasking not only the racism and imperialism of the Western capitalist establishment but also the CCP’s.

Against this background, genuine initiatives are sorely needed to organise across ethnic communities and speak out against racism and linking this to the need for more investment in the health service, education, and other public services. But those UK-based groups that initiated or agreed to support the Gerrard Street rally need to examine their own actions. Whether through incredible naivety or conscious endorsement they allowed themselves to be used as a platform for the CCP’s nationalistic, reactionary and indeed racist propaganda.

The fact that the demonstration had no representatives of other east or south east Asian communities was one tell-tale sign that something was amiss. That the organisers conveniently ignored the issue of Xinjiang, where there is horrific persecution of Muslim minorities by the Chinese government including openly racist and Islamophobic policies, was another sign that this demonstration’s real purpose was something other than “anti-racism”.

Statements by some of the UK-based organisers denying that the event was “pro-Beijing” are disingenuous. A list of participating organisations includes the Federation of UK Fujian Chinese, the Confederation of Chinese Associations UK, Chinese Students and Scholars Association UK, and the London Chinatown Chamber of Commerce.  All are connected to the Chinese government. The Chinese Students and Scholars Association is directly under the control of the Chinese Embassy in London and serves as an unofficial police network to monitor the 140,000 mainland Chinese students in the UK and prevent them from engaging in “subversive” politics.

These pro-CCP fronts have waged a high-profile campaign in the Chinese community and through Chinese language media in the UK to support the national security law and the vicious political repression in Hong Kong. This year, for example, the London Chinatown Chamber of Commerce and several other groups placed paid advertisements in pro-CCP newspapers to support the farcical “patriots-only” election in Hong Kong, to be held on 19 December, in which only CCP approved candidates can take part.

Polls show 44 percent of Hong Kong’s population would choose to leave if they could and around 90,000 have arrived in the UK this year. The CCP is concerned about large concentrations of Hong Kong emigres becoming a base for anti-regime activity and has stepped up its threats and intimidation as the harassment of Law and Cheng shows. By inciting nationalism among mainland communities overseas, Beijing is polarising relations and creating the conditions for a form of Chinese communalism – inter-ethnic hatred – to develop.

The authoritarian crackdown in Hong Kong, which began with the national security law in 2020, has resulted in the dissolution of 30 trade unions in the past twelve months, including the largest, the 200,000-strong HKCTU. All demonstrations and strikes are now banned. In a statement after the London demonstration, one of the organisers, the Monitoring Group said, “We believe in the right to protest and an extension of human rights in every society.” If we are generous, we could describe this as incredible naivety.

The small counter demonstration by Hong Kong emigres was no better. While the aim of these protesters may have been to expose the CCP propaganda and its hypocritical expropriation of the banner of “opposing anti-Asian hate” while hiding its crimes against Uighurs, Tibetans, Hong Kongers, and others, their message and antics were entirely counterproductive.

Instead of attempting to win over those who are not brainwashed CCP supporters, especially the greater number who follow via media and social media, the Hong Kong protesters only played into the hands of CCP, allowing CCP media to show “proof” that the Hong Kong democracy protestors are “anti-Chinese”. The anarchistic method of confrontation with no clear political message will only confuse local people making it more difficult to build grassroots international support for the anti-authoritarian struggle.

Unfortunately this is an amplification of the weaknesses and in some cases even reactionary features of the Hong Kong movement of 2019. After the defeat of the 2019 struggle, while recognising the sacrifices and courage of the many young protestors, there is a need to learn lessons from its political and organisational weaknesses and mistakes. Remember that in July 2019 at the high point of the movement there were attempts by sections of the Hong Kong movement to show solidarity with anti-government protests in mainland China in an attempt to forge a common struggle, while some Hong Kong racist protestors were blocked by other protestors from attacking mainlanders. This is one of the methods that needs to be learnt and reinforced, but the action in London went in the opposite direction.

While genuine anti-racists may have participated in this event, they could hardly dispute that it was hi-jacked by two racist groups hurling abuse at each other. Some among the mainland Chinese demonstrators yelled “cockroaches” at the Hong Kongers. This is the term used by the CCP media and Hong Kong police against protesters in Hong Kong during the 2019 mass democracy struggle. The Hong Kong protesters, or some of them, shouted “Go back to China” and “Shina”, which is the racist term for Chinese people used by the Japanese occupation forces in the Second World War.

Democracy struggle in a cul-de-sac

For Hong Kong youth who seriously want to rebuild the mass democracy struggle against dictatorship, the most important lesson of 2019 is that the movement was defeated because it was isolated to Hong Kong and no serious effort was made to build a united mass struggle with mainland workers and youth. This is the only force big enough to challenge the CCP-state.

Stunts like the London counter protest and the abuse hurled in tit-for-tat fashion by some of the Hong Kong protesters at mainland Chinese or Chinese-looking protesters, only serve to further widen ethnic divisions and reinforce the CCP’s nationalistic and anti-democratic propaganda which portrays the Hong Kong mass protests as a US-backed plan to attack China.

That a section of Hong Kong’s bourgeois democratic politicians, like Law and Cheng, willingly solidarize with the pro-Western Cold War camp on the patently false premise that these governments promote democracy, is a further obstacle to rebuilding a genuine pro-democracy movement. In order to succeed such a movement must unify working people in China, Hong Kong and throughout the region against all national variants of capitalism and imperialism.

Socialists condemn the racist language and politics of both sides. Both these demonstrations are examples of how not to fight against racism, the imperialist Cold War and China’s state repression. The London protests are also a warning to the left internationally of the pitfalls of approaching questions like anti-Asian racism and inter-imperialist conflict without complete independence from the capitalist classes and states involved, including China’s capitalist and ultra-nationalistic so-called Communist Party.

A genuine struggle against racism and against the chauvinistic nationalism pouring from all sides in the new Cold War is needed. The Solidarity Against Repression in China and Hong Kong campaign (SARCHK) and International Socialist Alternative, which also organises in China, Hong Kong and Taiwan, stand for just such anti-racist struggle based on uniting grassroots working people of all ethnicities to fight against the racism and nationalism that is endemic in capitalism.